How To Be A Supermom

In various dialogues I have had recently, in which I was describing the many various kid related tasks I have had on my plate lately, one of the responses I got was "You're a supermom", to which I snorted and said "Haha yeah right."  But it got me thinking.  What did I accomplish to deserve such off-target praise?

I hereby present to you, how to be a supermom... 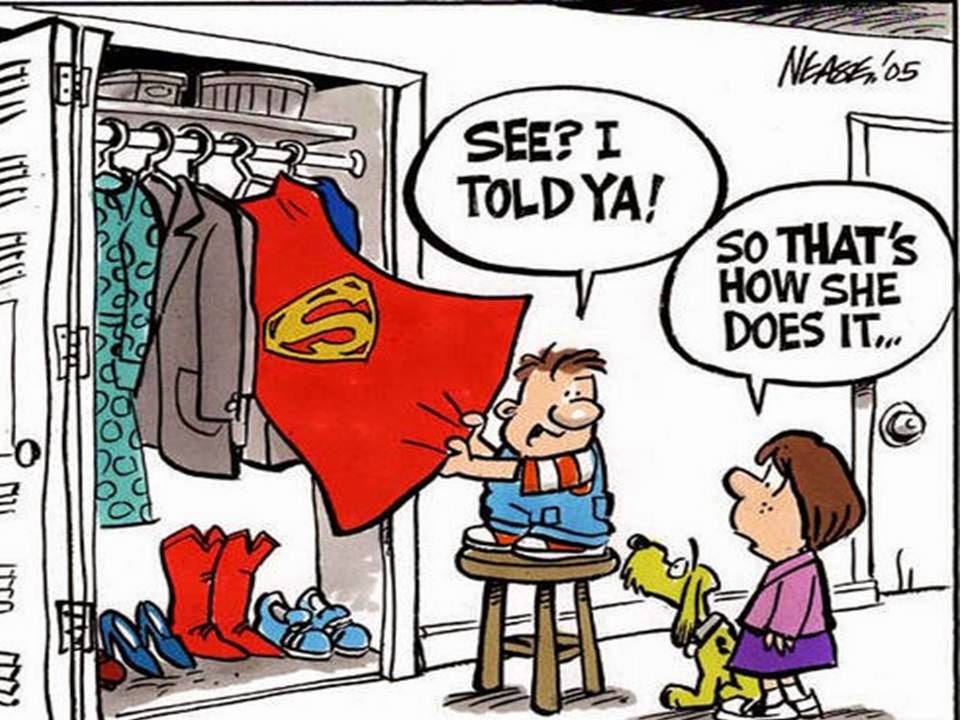 1. Work full time outside the home
This part isn't fair to the stay at home moms out there who are actually the real supermoms.  Omg, I could not do it, so kudos to you, for real.  But in my experience, the supermom compliments stem from the fact that people seem to think that working and having kids is somehow really, really hard.  "And you're working full time too?!"  Uh...there's this thing called daycare where my kids go while I go to work.  It all shakes out.

2. Have kids, preferably small, the more the merrier
It's somewhat hard to be a supermom without actually having kids, so...yeah.  Have some. Or acquire some like I did.  The greater the number and the lesser the age, the better.

3. Have many things to do and accomplish, including caring for said kids
Work deadlines. Doctor appointments.  Valentines to send to daycare (because two year olds totally care about such things).  Dishes, laundry and cooking to do.  Lunches to pack.  Notes to write to teachers.  Pull money from the bank for the babysitter.  Try not to run out of gasoline.  Pick up prescription.  Email family.  Maybe throw in some speech therapy for good measure.

4. Perform all of the above somewhere in the realm of fair to mediocre
Be absent from work for kid related stuff a whole lot.  Barely make regular work hours when instead you should be working overtime hours.  Scurry around in a hurry, tossing kids into car seats for all the stuff and things you have to do. Turn on the TV way too much for your toddler. Hope people don't come over at an inopportune time and see the wreck that is your house.  Bonus points if your car is overdue for an oil change and is four months out of inspection.

5. Mention some of the above in casual conversation
Better yet, post a facebook status about it.  And BAM.  You're officially dubbed a supermom.  Let the responses roll in saying how you're doing great, you've totally got this, "I could never do what you do" and, drum roll please, "Oh my gosh, you're supermom."  The ultimate.   Go ahead and fulfill the obligation to deny, deny, deny and call them all out on the LIES they are telling.  Supermom?  Haha funny joke. Yeah right.  It's all smoke and mirrors and thiiiis close to coming crashing down.  And yet people seem to think that your attempts at greatness that result in mediocrity at best are some valiant and wildly successful venture into parenthood.  Guffaw.