Last week for youth group, we loaded up the church van... 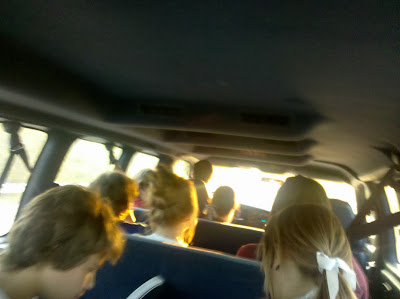 ...and took the youth to Fields of Faith at a nearby highschool. 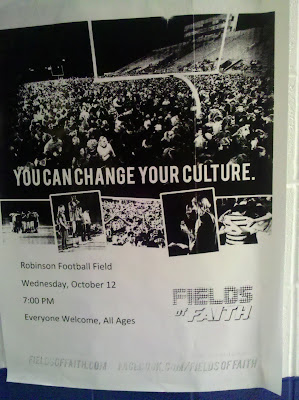 It was actually more like Courts of Faith because the electricity was blown on the football field or something, so we all went into the gym.  What is it?  Just a bunch of youth and adults from lots of different churches or youth groups, gathering together to worship, hear a message and pray. Somebody said there were 200+ people there.  It. Was. Awesome. 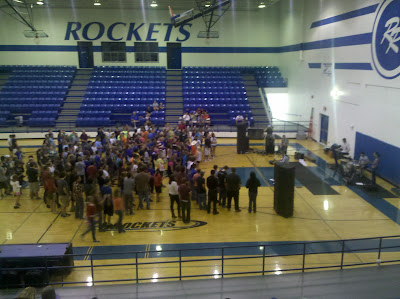 One of the bands from Antioch Church was there to lead worship songs and they did a super job.  I loved singing along and worshiping with those around me to some great songs. 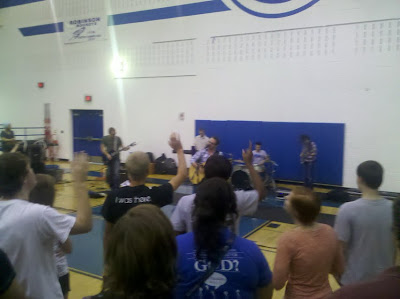 A youth got up and gave a short message, then we sang some more, then a couple coaches from the highschool each gave a message as well.  Then they opened it up for just a time of prayer, alone, with each other, with some youth leaders ready to love on people at the back.  As they were explaining this time, I was thinking "oh dear, I bet all these youth will find this awkward and will just end up chatting or goofing around."  Not so at all.  Some went to the back to chat with or pray with the youth leaders there.  Some paired off to pray.  A group of girls scooted off to a corner and another group of youth sat down in a circle on the floor but the circle kept getting wider and wider as more people joined.  A few of our youth joined hands and I jumped in along with some others.  It was a really special time of heartfelt prayer to our Lord.  I got choked up, not gonna lie.  Afterwards, Carlie said "Don't cry Anna" but I told her they were very, very good tears.

One little group that really made an impression on me was this quad of young men, heads in, arms around each other, intently praying for quite a while. 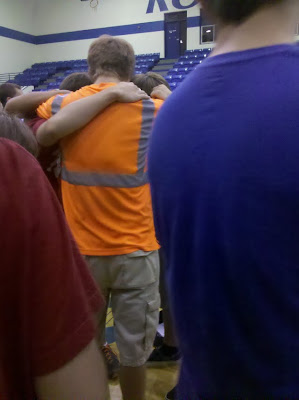 I think one of our youth guys was in this huddle but otherwise I have no idea who these guys were.   It just made quite an impression on me because it's not often that you see youth, especially guys, this engulfed in sincere prayer.  Prayer can be an emotional thing, can produce tears, as I mentioned above, and can end up with hugs all around.  Stuff like that.  Mushy stuff.  Those aren't bad things at all, and it's plenty common to see girls being mushy or emotional, but I think young men these days have a tendency to try to maintain a manly reputation at all costs.  But this huddle didn't care what people thought. They didn't care if people were watching.  I would have liked to hear what was said in their huddle.   I'm sure it was great.

Anyway, I don't have much point to this post other than to share a cool experience we had with "our" kids.  I think they enjoyed it and we have put Fields of Faith on our radar to attend in the future if it happens again!
Posted by Anna Pie at 10/16/2011