Dear Women, How Did We Plan Weddings Before Pinterest?

How in the world did we ever put together a wedding without the aid of this "Pinspiration"? (That was a new one on me, oh lordy.)   How did we come up with centerpiece ideas or find diagrams of crafty card receptacles or cute cake toppers?  It must have been like a creativity desert, a desert I tell you, in this land of yore when Pinterest did not exist.  You know...a whole five years ago...

So I thought about this.  And I decided that the answer to the question "How did we ever plan weddings before Pinterest?" is either a) you paid an event planner/designer big bucks, b) you have craftiness in your veins instead of blood or c) you ended up with a wedding like mine.

You see, my wedding was not Pinterest-worthy, not "Pinspired" (oh lordy).  An accountant planned it, for goodness sake.  The total cost of the thing came in well under ten grand, much to my Dad's delight.  It was a mix of way-too-bright green and "coral" that, let's by honest, was really just light pink. 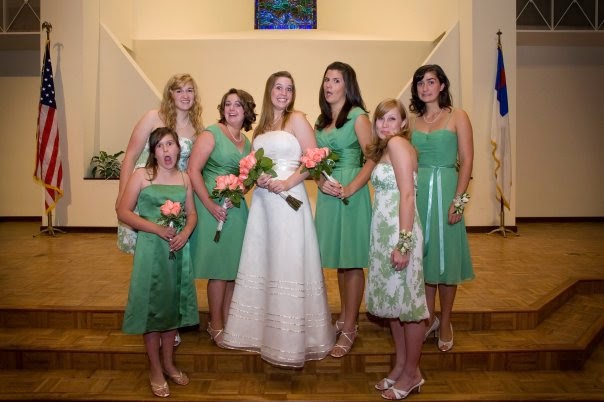 My major splurge was to rent white chairs instead of using the church's maroon, metal-legged, plastic potluck chairs with the hole in the back.  Yeah, you know the ones. 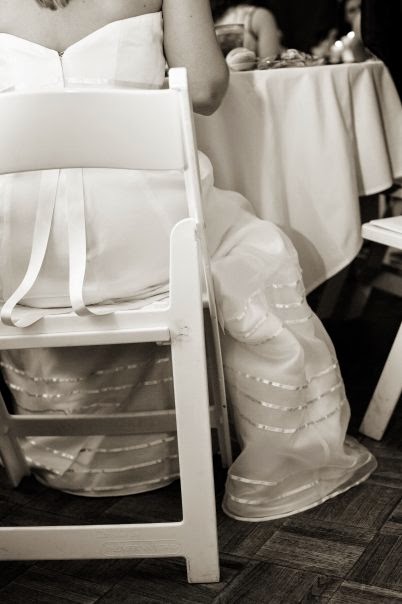 There was a basketball hoop at the reception... 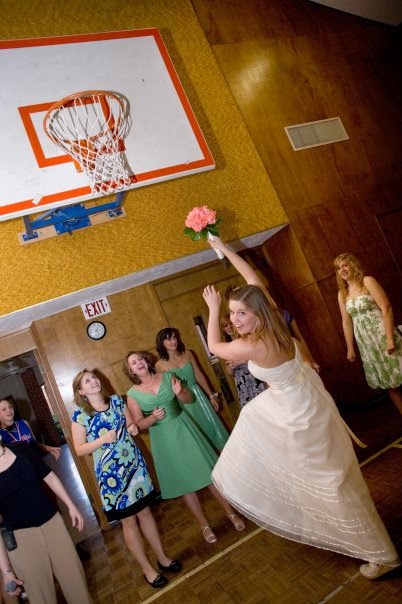 ...and my hairdo was...wait, I was supposed to come up with a hairdo? 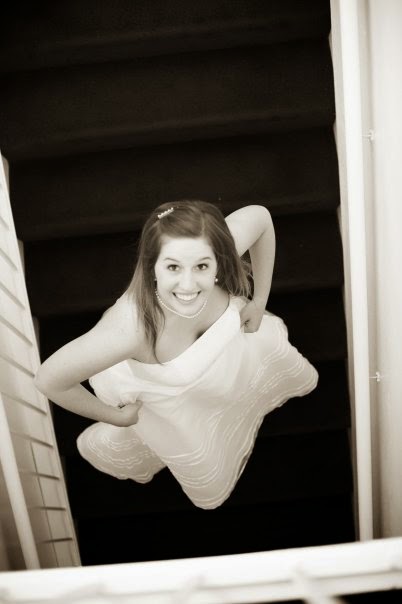 I randomly checked boxes on the caterer's finger food menu and basically threw it back at them saying "I don't know how to do this!" and we ended up with way too much food that included a super cool fruit volcano that I did not have time to partake of but will never ever forget. 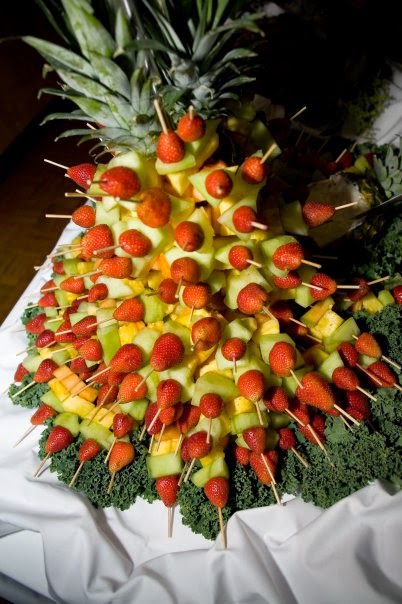 My version of an event planner was my friend Sonya who helped with day-of people herding and who I paid by purchasing $50 of chickens or goats or something via Heifer International in her honor.  Also by returning the favor five years later and helping run her wedding. 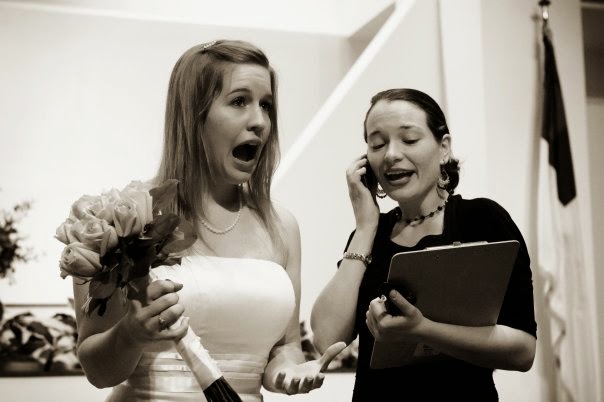 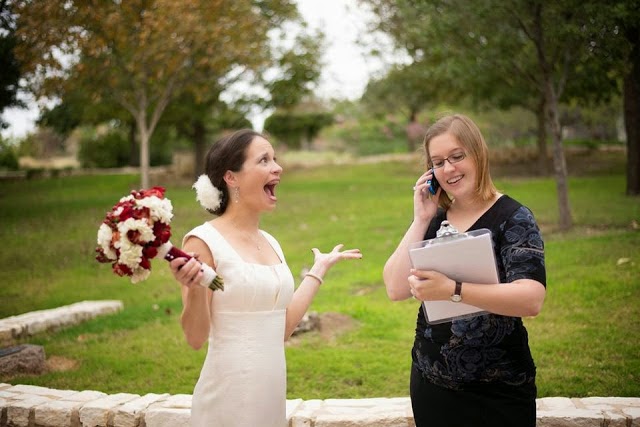 The closest I got to something Pinterest worthy were my centerpieces, which I conjured up in my brain and created by wrapping ribbon around candles, securing it with a straight pin jammed into said candle, plopping said candles onto cheap, silver charger plates from Hobby Lobby, throwing some fake ivy on it for good measure and calling it a day. 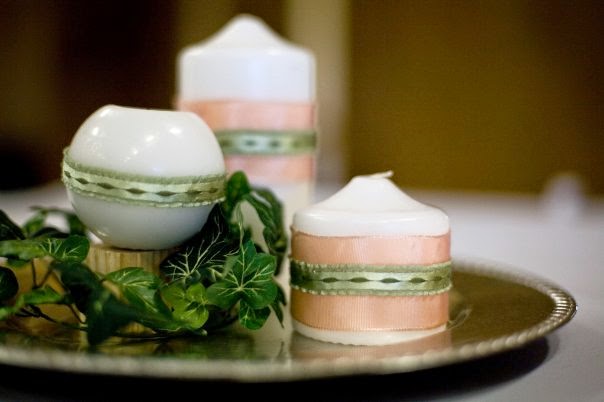 Oh and the cake matched, which seemed like a logical, orderly thing to arrange... 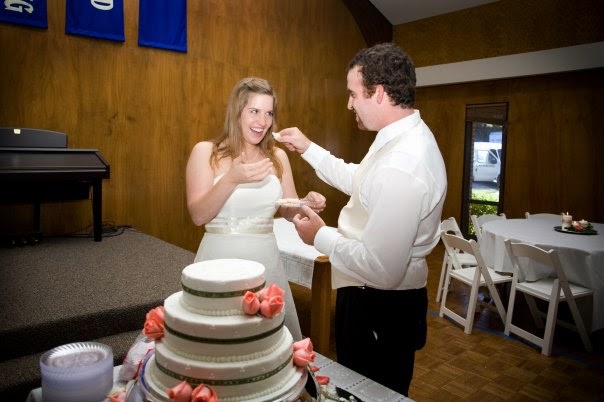 We left the wedding in jeans and Caleb drove us away sitting on the toolbox of Trent's old truck. 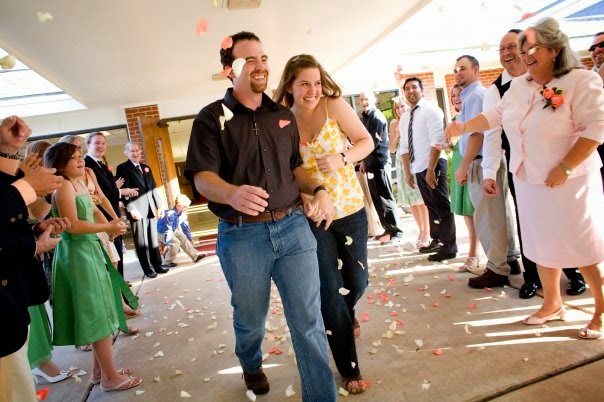 Was it a Pinspired wedding day?  Nope.   Did we get ourselves married?  Yep.

Here's the thing ladies...people have been getting married for centuries without the aid of Pinterest.  There have been gorgeous weddings and tacky weddings, church weddings, country club weddings, courthouse weddings, weddings that are "timeless" and weddings that even just a few years later make you say "oof, what was I thinking?"   You know what they all have in common?  Not the centerpieces or the bridesmaid dresses or the nice white chairs.  No, what they all have in common is that somebody got married and began a new life together.

Now, I don't intend to bash Pinterest.   But, in the words of pinterestyouaredrunk.com, which I follow instead of the actual Pinterest, "Y'all are going a bit overboard over there."    To those of you who planned or are planning a wedding with the aid of Pinterest, I want you to ask yourselves a couple questions.

How often do I flash my phone screen in my fiance's face to show him possible ideas that, honestly, he doesn't really care about until they are something I am set on and want to follow through on?

How many of my or my fiance's own unique ideas ended up sacrificed because I found something cooler/fancier/trendier/pinterestier?  (See, I can invent words too!)

How much of this wedding is ours and how much is the internet's?

How sick is my fiance of hearing the words pinned, Pinterest, pinspiration, etc?

On that note, have I said the word "pinspiration" and my fiance said "What? Perspiration? Are we giving out little monogrammed deodorants as favors?"

You get my point.  I hope.  Are you using this online idea community in a healthy way or are you going overboard over there and pinning your wedding to death?  In all your planning and pinning, is your goal just to have some magazine worthy party, or to marry the love of your life, regardless of how that event takes place? 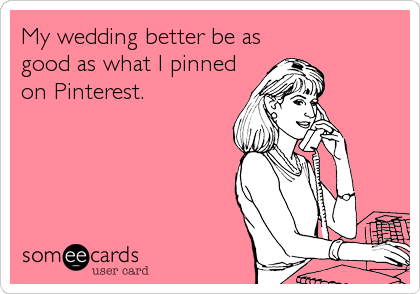