My First Adventure In Quilt Making

I took on the adventure of sewing a quilt for our nephew, Asher, right before Christmas. I made a blanket for Trent for our first Christmas together but have never done a patchwork quilt. I was scared, even of just squares. I had visions of corners and rows not matching up, the seams being lumpy, etc. Scary stuff. But I headed to Joann Fabrics to conquer my fears. I started wandering around looking for fabrics that matched, then I found the spot where they sell quilt kits. They are each a set of matched fabrics that are already cut to the size you need of each fabric (you still have to cut out the squares from that), and include a picture of how the squares or pieces are supposed to be sewn together. Brilliant. The one I found was $25 but if you are on Joann's mailing list you get coupons all the time for 50% off one regularly priced item. Score. I bought the kit. ...Then I felt like I was cheating. Then I assured myself that all I skipped was lots of time, which I didn't have then, traipsing around the store trying to figure out what fabrics I wanted and how much I needed. Anything that bypasses me having to do mental math is a good thing.

After a few fleeting thoughts of "what have I done? I don't have time to sew a quilt!", I found time and got to work. Aaaaand, I thoroughly enjoyed it, even though most of my corners indeed did not match up, and the process of going back and forth pinning and sewing each square made me feel kind of ADD. Pin at ironing board, sit down, sew for 6 inches, get up, pin again, sit down, sew 6 inches...eesh. But it came together. It ended up smaller than the allotted backing piece which I had already cut out, so I just trimmed that down, sewed the back on, turned it inside out and sat down to whip-stitch the hole closed, after explaining to Trent what whip-stitching is. My cat helped with that part: 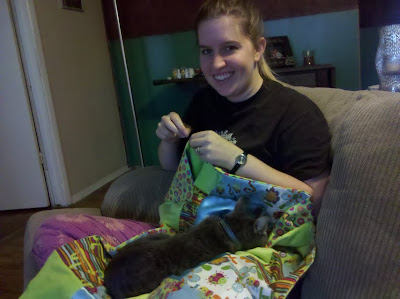 Then my task was figuring out how to tack the front of the quilt to the backing so it wouldn't balloon out. I wanted to do something more creative than just "stitch in the ditch" (sewing along the squares or just sewing up and down in random spots), so I thought of sewing buttons at some of the corners. Buttons would be cute but I wouldn't want little Asher to lay down on it and end up with button prints on him. The answer: felt buttons! These things are great, also from Joann's. They look just like regular buttons but they are made out of stiff felt so they are flat and soft and won't leave button prints, but are a cute way of tacking the quilt together. After sewing buttons on for the whole length of "A Knight's Tale" (RIP Heath Ledger), it was done! 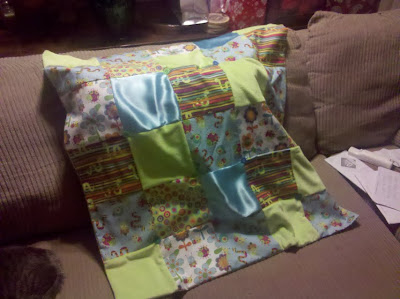 It's a mixture of flannel, satin, plush and cotton squares. The backing is that flannel polka dot fabric.

K'Lee opened it for him at Christmas. 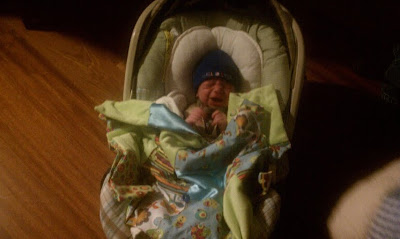 I promise he liked it! He was just not happy about being put in his seat... 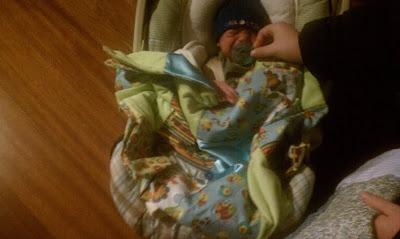 Here ends the tale of my first adventure in quilt making!