This past January, Rach, K'Lee, Steph and I were all together for our Create Your Own Coming of Homies 2011, which was a blast. Part of that was a trip to Common Grounds coffee shop in Waco. That is where I saw this: 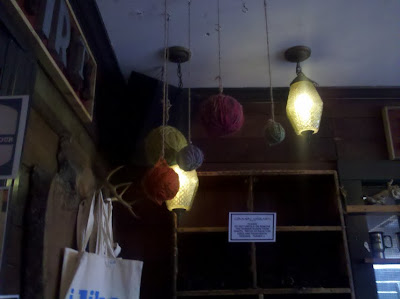 Yarn hanging from the ceiling? Weird. But really cool if you are as much in love with yarn as I am! I endeavored to try this in my craft room and...a whole month later...I did. One bruised shin from climbing on the dresser and two eyes full of ceiling popcorn dust later, TA-DA: 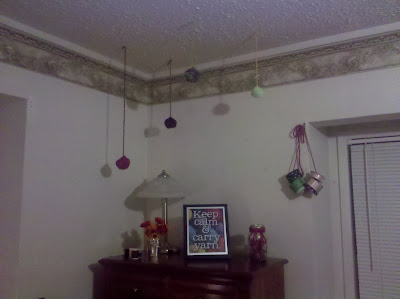 Somehow it does not look nearly as cool as the yarn nooses at CG, but that's ok. I don't think the yarn balls are big enough, maybe they are too spaced apart or not enough of them. Oh well. (Many thanks to Kristin for my awesome "Keep calm & carry yarn" sign that she gave me for my berfday!)

I just tied some yarn to other yarn that had the ends tucked in securely, then tied that to a push pin, then hammered the push pins into the ceiling. 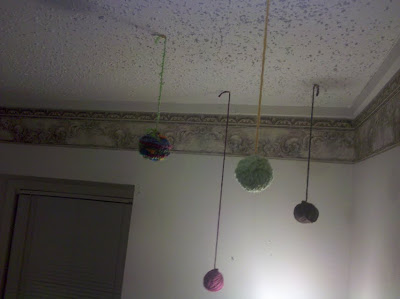 I know, I know, that wallpaper border is hideous (and upside down according to my mother in law). It will go away someday, likely not until I say RIP to my craft room and turn it into a nursery.

So there you have the story of my yarn hanging adventure. Trent bets that the push pins will not hold them up there very long...we shall see. He says he'll come back in with screws later when they fall down. The yarn is actually rather light and those pins are pretty secure in our unusually hard ceiling so I'm betting they'll stay put.

Bonus picture of the adorable paper flowers I got at the dollar spot at Michael's! One buckeroo each!