Three Things That Have Made Parenting Easier For Us Amateurs

1. Twin bed in our toddler's room
Brother still sleeps happily in a crib, except for one isolated evening when he decided to dive head first out of it...pretty sure the crash landing hurt enough that he decided freedom wasn't worth it.   Since we are licensed to foster age zero to seven, we stocked up before our first placement on some various furniture, including a toddler bed and a twin bed.  The only thing we did not buy were cribs, and, of course, we ended up needing two of them!  (Pack n plays sufficed in the interim)  Once we got Brother situated with the pack n play and later the crib, we never got around to moving the other beds out opted to leave the other beds in there.   It turned out we like it this way, though it thoroughly confuses the social workers when they come visit and do a walk through.  "Wait, which one does he sleep in?" 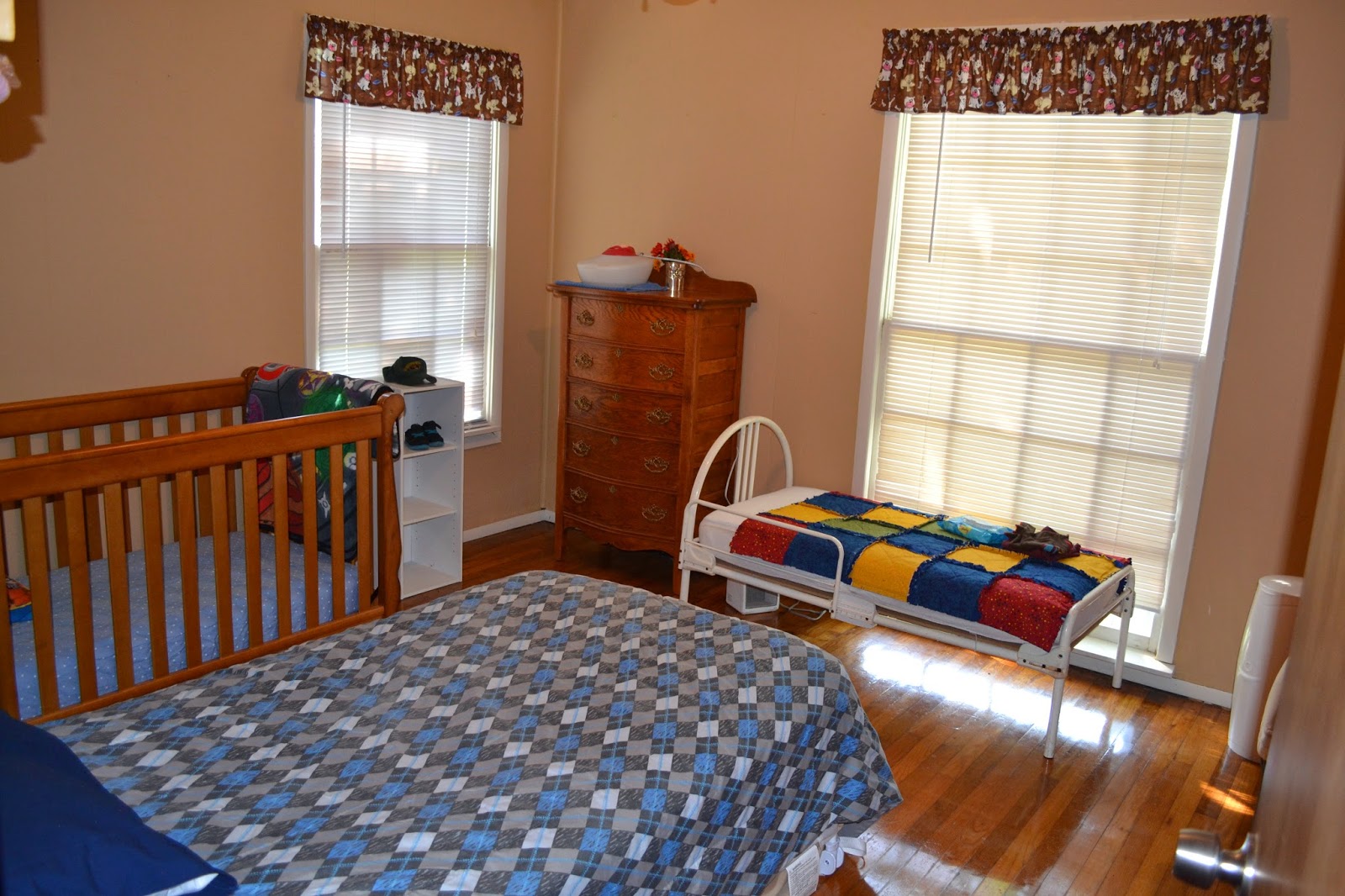 We use the toddler bed as a spot to change Brother's diapers and clothes, since he's a little big for the changing pad in Sister's room and we ended up preferring this separate spot for him in his own room. Remember the week from heck, back in the spring, when our whole family crashed and burned?  Turns out it was a blessing to have a real bed in our toddler's room for Trent to sleep in for a few nights while said toddler fought pneumonia.  And then there are nights here and there when Brother just doesn't want to be alone, sometimes as he falls asleep, sometimes in the middle of the night.  We don't question this.  We just make him feel safe, which is our job after all.  We've found that our little boy who sometimes screams and cries from his bed if alone will lay down, roll over and go right to sleep if one of us is in the room.  So we'll stretch out on the twin bed for a little while as he drifts off, then quietly get up and leave him sleeping peacefully.

2. Toy bins and shelves
The first week or so after the kids came to us was utter chaos.  The house was a disorganized disaster of stuff we had accumulated or been given to try to prepare for our age range.  Once these babies came to us, we had a few frantic days of trying to figure out what we had, what we needed, what was accessible, what was already stashed in boxes, etc.  It stressed me out major.  I knew if we just got organized, the sudden shock and stress of caring for two children would be less.

Enter Judy, or as I affectionately refer to her: Mama Judy.  She was our substitute mama in those first weeks since both of ours were three hours away, and has continued to be an amazing resource and support.  On day six of us having the kids, after many harried texts about what a wreck our house was, she told me to take off work early while the kids were still at their first day of daycare and meet her at our house. "I'll be there at 3:00." From her minivan came shelves, bins, baskets and tote boxes and she set to work rearranging our living room and setting up an organized landing zone for toys, while I sorted kids' clothing in their rooms.   Her strategy: throw everything in a bin, put said bins on shelves and call it done.  "Clean surfaces," she said.  "That's what you need.  Clean floor, clean tables.  Put stuff in bins to give you clean surfaces and it'll make a world of difference." 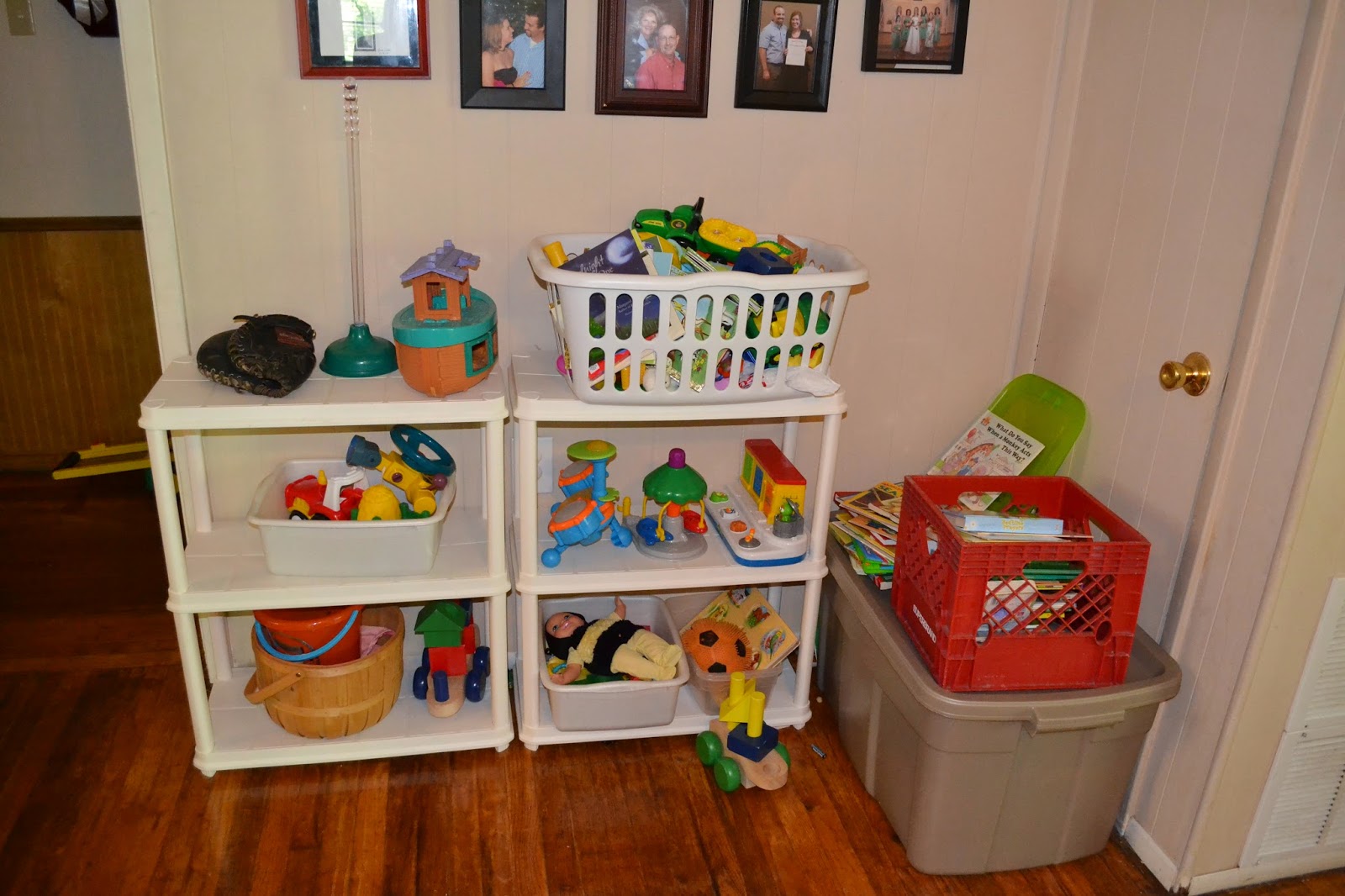 How long does it take to clean up the kids' toy tornado at the end of each day?  About two minutes.  We walk around with a bin (or two, depending on the severity of said toy tornado), throw toys in it willy nilly and put it back on the shelves.   Done.

3. Rag bin
One thing we received a lot of when we first got the kids were small towels and rags, along with the comment "you'll need a lot of these".  It's true.  At first I put them nicely in a drawer in the kitchen but later decided it would be much easier to have them more accessible.   So, as part of Judy's "put stuff in bins" strategy, we have the rag bin out in the open, on a shelf, equidistant from the kitchen, dining room and living room, ready to be grabbed at for spills, spit up, you name it. 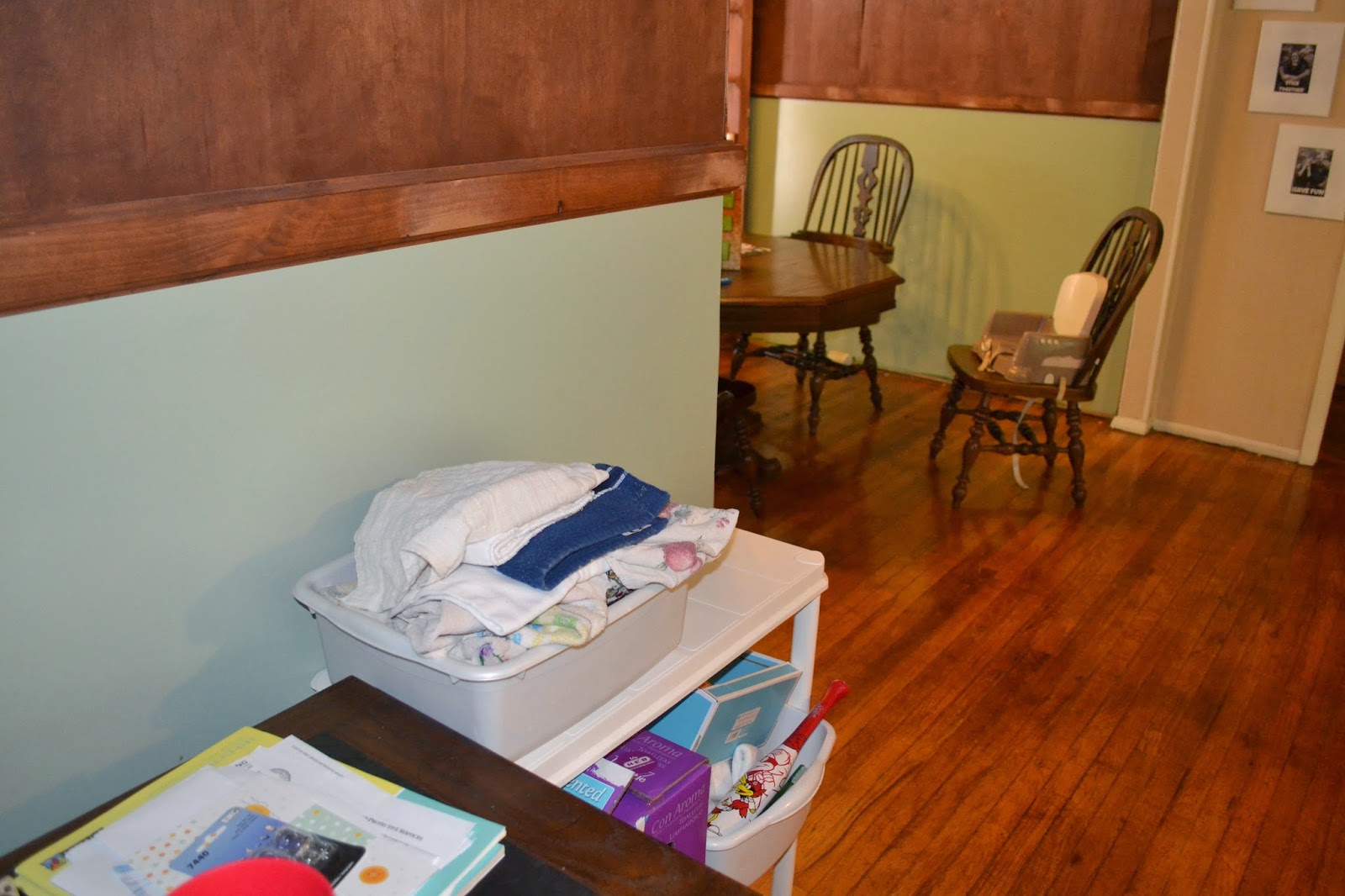 Is it the prettiest decor ever?  Nope.  Does it contribute to our sanity?  Yeup.