A Day in the Life of a YM Wife

I waved goodbye to my husband today as he rode off to two straight weeks of church camp. Of course he had to stop and get coffee grounds for his camp stint, so we said our goodbyes at Starbucks.

He doesn't know I took these pictures. And the only reason I took these pictures was in anticipation of a blog post (also partly because I think he looks schmexy on his motorcycle). And that bag is just his bedding and one change of clothes. His suitcase is going tomorrow with the kids in the van...even he couldn't pack for two weeks in a motorcycle bag... 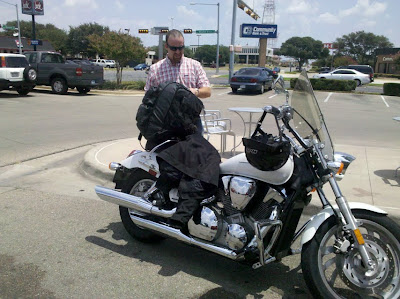 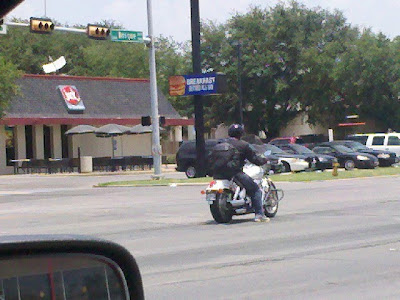 I originally intended for this to be a blog post of wit, bravery and insight into the life of a YM wife left alone while her YM husband goes away to various long church events like mission trips and camps. I also thought maybe this year wouldn't be so bad because I had gone through this separation last year already and now know how it goes. Well, original blog intentions be darned and really I was just in denial leading up to his departure.

Trent and I are such a unit, such a part of each others lives that it is rough when we are apart. And we have never been apart for as long as two weeks, since we've been married. I will get to go see him for a few hours on Saturday in between Niners ending and staff duties for Eighters beginning. In the meantime, I will try to keep myself busy, which will be easy since I find myself booked with something almost every evening that he is gone, including overseeing youth group at Skate World. Saweeeeeeet! I lurv rollerskating. Watch out.

Anyway. After Trent left, the remaining Futrals were somewhat out of sorts. The cat was sad that daddy took his motorcycle jacket, which is very regularly her bed (I don't actually know that she was sad, but she had to find another place to sleep: his tool bag...comfy?). I ate a whole box of macaroni for dinner, after making a special emergency trip to Walgreens to get some. Then I found that the precious idiot below got a hold of one of my new Teva sandals, which I adore, and did a little teeth cleaning on it... 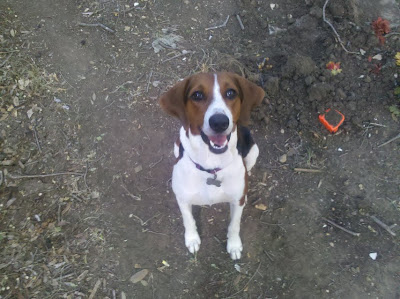 I freaked out and put her outside, meanwhile slapping my own hand with the sandal in anger, which was stupid because I think it burst a blood vessel in my victim thumb, which is now somewhat purple and hurt really bad for a while. So basically I lost it and the tears I had unconsciously been holding in since Trent left let themselves go. Over a sandal. Oh, and the whole being without my husband for two weeks thing. Meanwhile I was texting with him and he was sweet and encouraging as usual and told me to go get new sandals tomorrow. But I calmed down and trimmed the edge of the sole she chewed on and it looks ok. It just looks like I was hiking and a jagged rock took a chunk out of it or something. Riiight, Anna hiking? Pssh.

I'm rambling. And I don't think I really have a point other than maybe that there are some sacrifices to make in ministry. There are times when I want to have dinner at home but Trent has to go to a meeting. Each summer I'm guaranteed about two weeks without my husband. Would have been three this year if I hadn't gone on the mission trip too. But that's all ok. We'll make it through and Trent will have a blast in the meantime. He loves camp and has been excited to go and I am excited for him. Ministry is about putting others before yourself a lot of the time. A good minister can't just be focused on themselves or else they wouldn't get any ministering done! My cop out is that I am a CPA, not a minister, so I am allowed to cry about my husband being gone... But in all seriousness, in ministry others come first.

I'd also like to give a shout out of sorts to any spouses of military personnel who get deployed on missions, of any length, to anywhere. Frankly, I don't know how you do it. After the stupid sandal freak out, I thought about it, that Trent is away for two weeks of fun with youth, and only two weeks. Not 3 months, 6 months, a year. He's not in another country, he is an hour and a half away. I can do two weeks. I'll still miss him, but I can do it.