Our Youth Love Each Other

It's probably pretty evident from this blog and our facebooks that Trent and I love our youth.  Duuuh.  But you know what is really, really cool?  Our youth love each other.

We always have supper before youth group on Wednesdays, which we usually eat in the Fireside Room right outside the church kitchen.  The normal furniture set up in this room is a big round table, a coffee table surrounded by two sofas and two arm chairs, and a little card table.  It's probably smaller than a card table actually.  This past Wednesday, I walked out of the kitchen with my Santa Fe Stew and saw that four people had already claimed the little table so I went over to the big table.  Then I looked over a bit later and realized that a few more had pulled up chairs to the little table.  This thing barely has enough room for four people, much less six!  Especially when Michael pulls up one of the ginormo arm chairs.  Pretty sure BB was eating from his lap.  At the time, I thought it was just cute and funny that they were all crammed around this small table, so I snapped a quick pic. 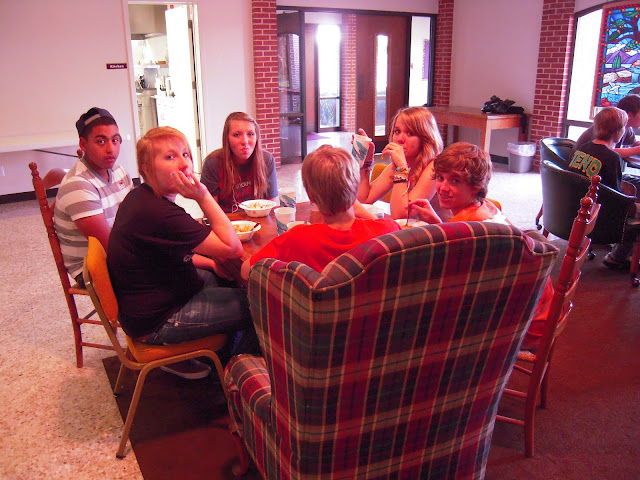 But later I got to thinking about how this shows how much they like each other.   And I also thought about how cool it is that this little table doesn't see the same people sitting at it each week.  It's not like these six are a pack that nobody can crack and that is their table.  Nah, we have a different configuration of groups each week during supper, at the little table, the big table, the sofas, the coffee table.  Of course the youth have those in the group that they know better, are closer to, etc, but overall, other than a few spats that occasionally and inevitably rise and fall among teenagers, everyone really, really likes each other.

Email ThisBlogThis!Share to TwitterShare to FacebookShare to Pinterest
Labels: Adventures in Youth Ministry