"Saracita, I Am Painting 3 Foot Tall Weeds On Our Closet Doors And They Look BOMB!!"

The title of this post is a reenactment of the text message I sent to my sister as I transformed the closet doors in our bedroom into a windy dandelion garden.   It was super fun and pretty easy.  I had toyed with many stenciling ideas for our new room and landed on this stencil from Cutting Edge Stencils. 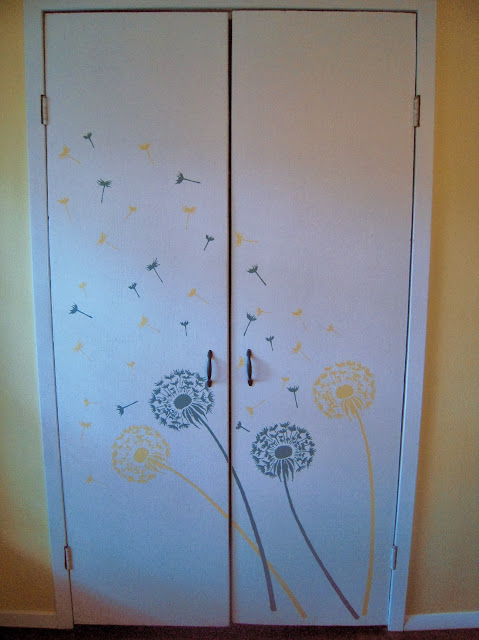 I used leftover yellow paint from a test can that was our first attempt at yellow for the walls that we deemed too bold.   I also used leftover gray paint that we used to paint the frame of the full length mirror in our room (to the right of the closet doors).  All matchy matchy and nice.

Using the stencil was pretty easy.  I followed the directions' recommendation and bought a spray adhesive to lightly mist onto the back of the stencil so that it would temporarily stick to the closet door and prevent the paint from bleeding under the edges of the stencil.  Since this design has a lot of little bitty spaces, this was super helpful and this would have been a disaster without the adhesive.  Otherwise I just used painters tape to hold the whole thing in place and got to painting with little 99 cent craft paint rollers. 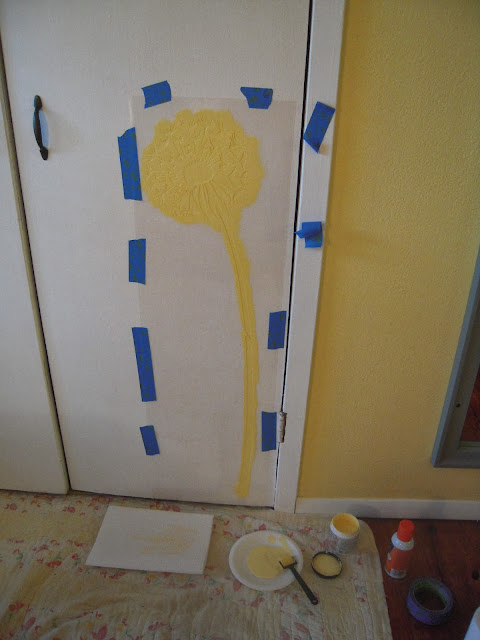 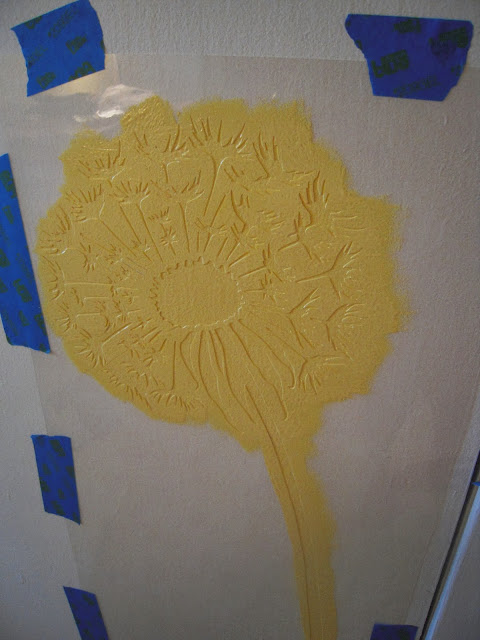 I let the paint dry on the stencil in between painting each dandelion to prevent stray paint on the back from swiping onto the doors.  I also held it up in many different spots to figure out where I wanted to do the next one, then reapplied spray adhesive lightly, taped and smoothed it in place and went to town with the paint again. 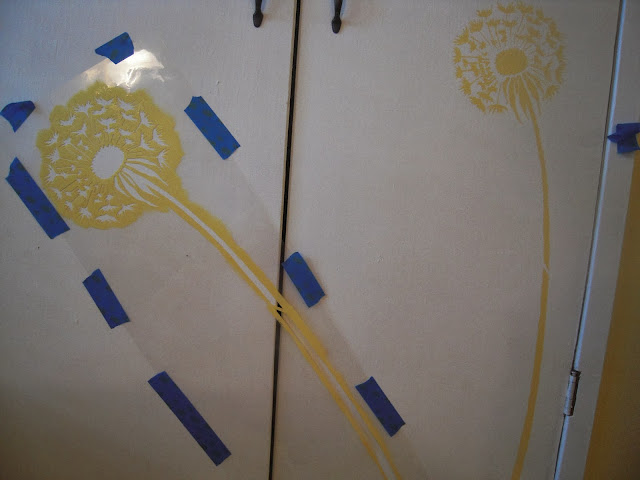 When I switched to using the gray paint, I actually flipped the entire stencil over for one of them so the stem would be going a different direction.  This made it very important that I let the paint already on the stencil dry since the other side was covered in it. 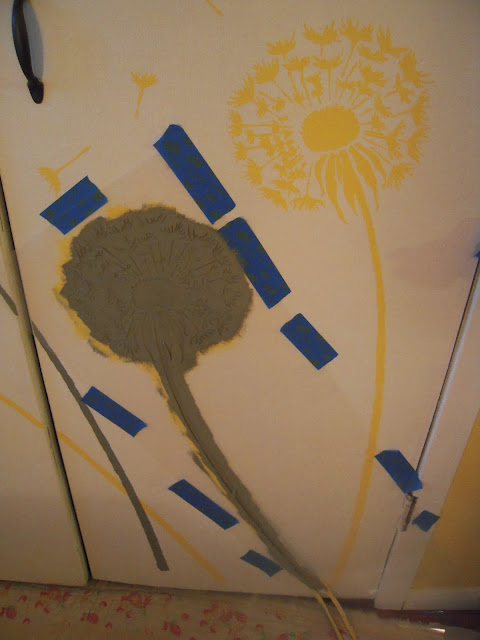 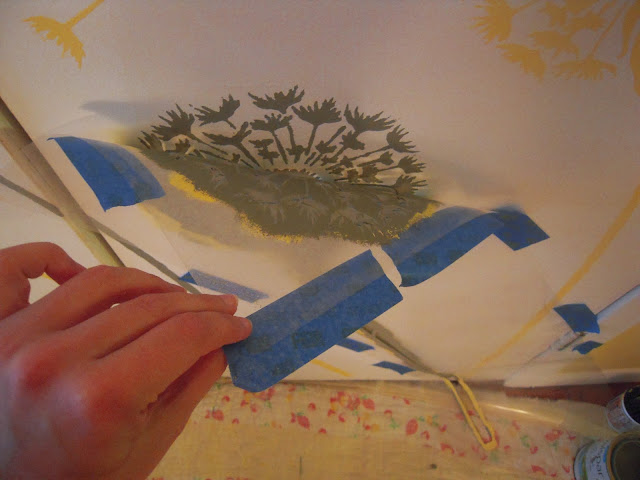 After painting four successful weeds flowers onto the doors, it was time to make it a blustery scene with dandelion seeds flying away.  The stencil came with these three seed stencils which I set about randomly placing all over the doors. 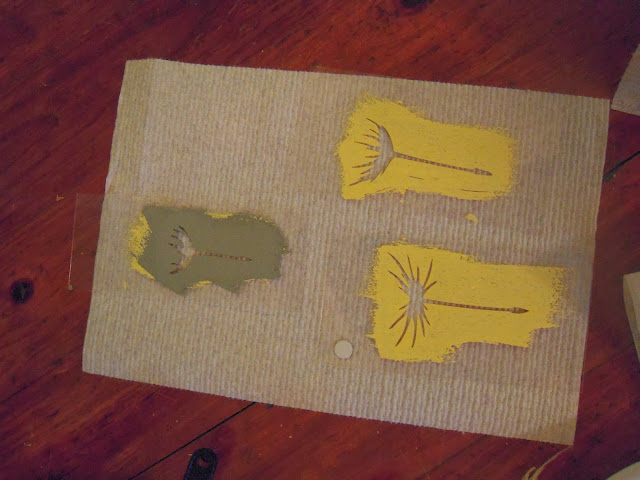 This was the funnest part because there was not much rhyme or reason to what I was doing other than generally spreading the yellow and gray ones evenly and making them look as if they were blowing away. 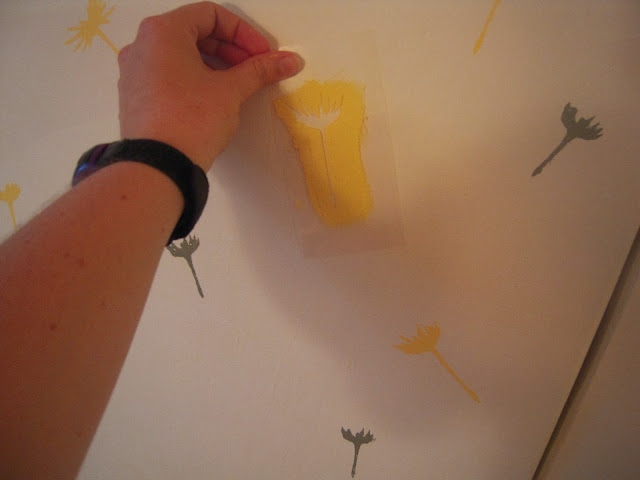 I loooove how our little closet door weed garden turned out! 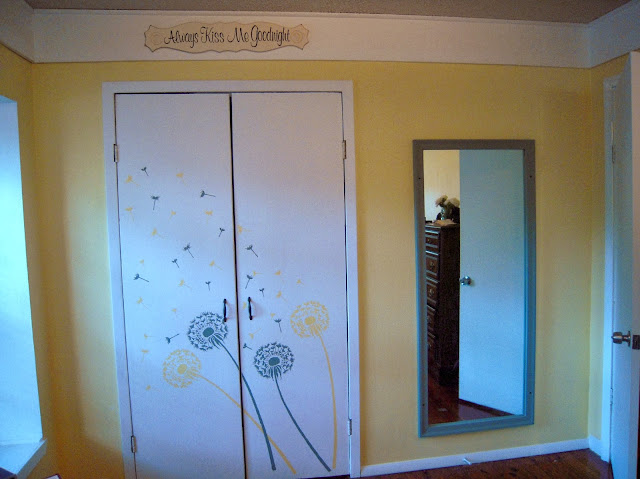 P.S If anyone would like to paint their own 3 foot tall dandelions anywhere in their house, please feel free to borrow my stencil.  To use it anywhere else in our house would be major dandelion overkill, so it has pretty much served its purpose.
Posted by Anna Pie at 10/02/2013