You may remember this story canvas that my friend Steph made for me and Trent: 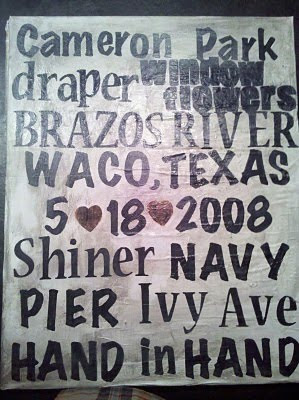 Well, here are the first three installments of my promise to show and tell the stories in this canvas.
First, Cameron Park. One evening, the second weekend of my sophomore year at Baylor, Steph called me and said that a group of people from the honors dorm (where we lived, yeah we were cool) were at Cameron Park playing frisbee and such and that we should go find them. She also mentioned this guy Trent that was there that she thought I should meet. I agreed, thought about showering and getting cute for the meeting of said guy but decided that if anything were to come of meeting him, he had better like me in athletic shorts and my white Baylor cap as well as dressed up. (I still have that cap and it reminds Trent of when he met me) After quite a while of being lost in the dark in different areas of Cameron Park, we found the group, right about when they were wrapping up and heading back to campus. I shook Trent's hand and smiled. I smiled the rest of the evening. We all went back to campus and some of us hung out in the dorm. Someone had a video camera, filming people horsing around and spinning in desk chairs. My smile was caught on camera that night. To quote Highschool Musical 1: it was the start of something new and turned into something super. About a month later, we went on our first date, to Lake Brazos Steakhouse, a place neither of us had been. As we sat outside on the patio by the river, we realized that right across the river was the spot in Cameron Park where we first met. This picture is taken standing where we first met. That's "our" steakhouse across the river: 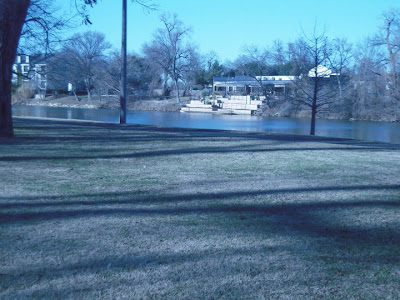 Crazy!
Next, Draper. Draper is an academic building on Baylor campus, connected to buildings called Old Main and Burleson. Each building has a tower. 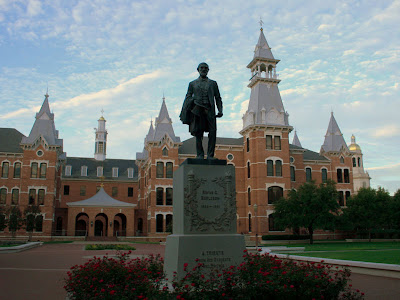 Trent and Caleb made a hobby freshman year and following to get up into these towers. Somehow in planning our first date, Trent and I decided that Draper Tower would be part of it. Steph told me as I was getting ready, "A first date isn't complete without doing something illegal." Haha. So we went to Lake Brazos Steakhouse for dinner, went for a stroll on the suspension bridge where Trent asked me to be his girlfriend, then I changed into more practical tower climbing shoes and we headed to the top of Draper. 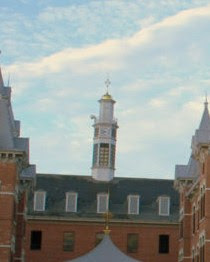 There is a door out onto the top deck and room to walk around it, with a railing. It looks rather tiny in this picture. It was a beautiful night, September 30, 2005 and we could see all of Waco from up there. It was breezy and cool and wonderful. Draper Tower is where we had our first kiss, where we talked about being a couple and where we tried to believe the amazing thing that was getting started between us.
Finally (for now), is "window flowers." Sophomore year, I had a glorious little dorm room all to myself, with two closets and three windows, on the second floor of Memorial Hall. My windows are the three in a row within the grey cement part on the front of the dorm, on the right side. 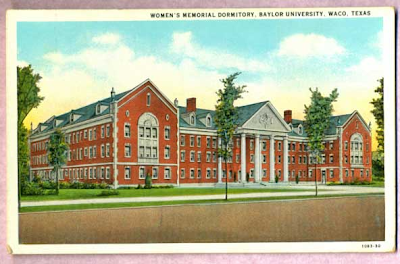 This randomly googled image must be rather outdated as there are now much, much bigger trees around the dorm. Anyway, that is where I lived when Trent and I started dating. On with the story. One Saturday (I think) morning a few weeks into our relationship, I had just gotten up and was putting around in my room. I got a call from my boyfriend (eee!).
"Hey can you look out your window and see what the weather looks like?" So I kneeled on the sofa I had managed to fit in my little room, opened the blinds and looked out the middle window.
"Um, not a cloud in the sky..."
"Oh...are you looking out your left window?"
"No, middle. What is going on?
"Look out the left..."
"Ok.........oh my gosh!!"
There on my second floor window ledge, sat a coffee thermos of beautiful carnations. I broke the dorm rules and opened the window to retrieve my window flowers. Then I thought about the improbability of flowers waiting for me on my window ledge. Trent was still on the phone, hearing my happiness and explained that he had climbed up to my window at 2 in the morning with the flowers originally in a glass vase but that it fell in the process. So he went and stuck them in a heavier coffee thermos and tried again. After a cut hand from the metal grate thing under the window (which is the only reason he was able to climb up there in the first place) he nodded at his accomplishment and went to bed. The next morning he was scared to death that the flowers had fallen during the night. But they stayed! How many ladies can say that their man climbed to a second story window to leave them flowers? Hmm?
The weather forecast for that day became, and always will be, "Sunny with a chance of carnations."
Posted by Anna Pie at 3/26/2011