Are you ready for part 1 of our Homemade Christmas reveal?  Get excited.

We succeeded in homemaking our Christmas gifts for each of our immediate family members this year.  I knitted prayer shawls for our moms and sisters and Trent crafted various woodworking projects for our dads and brother/brother-in-law, and an extra woodworking project for his mom too.   This first post is about the prayer shawls.  The idea of a prayer shawl is you make it specifically for a certain person and pray for and think about them while you knit, purposefully knitting love and prayer into each stitch for that person.  When you give it to the special recipient, they can be wrapped in prayer whenever they snuggle up in the shawl.  Now, not gonna lie, I spent a lot of time knitting while in the car or watching tv or otherwise not being in an entirely prayerful mood, but that's ok.  The point is that these shawls were made purposefully out of love for special people in my life.

We had the homemade Christmas idea this summer and I set to work knitting up a storm, knowing I had six shawls to make and they would take a while. This is why I didn't blog about crafts for basically the past half of this year! I made Donna's first because some yarn jumped out to me as the perfect color for hers, then I focused on my mom's and sisters' because we were headed to Fredericksburg for Sauer Christmas first, leaving less time to finish them.

Here they are, from top to bottom: Abby's, Sarah's, Mom's and Katy's: 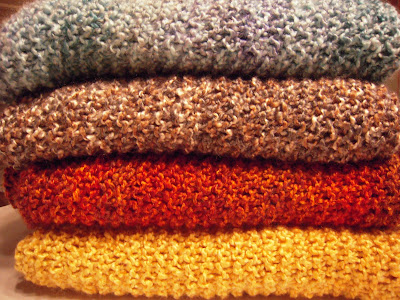 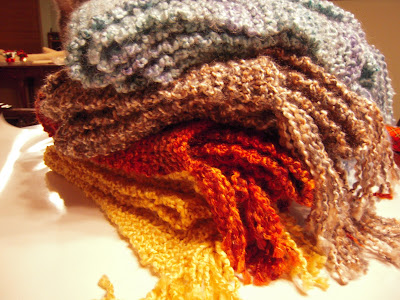 I included a note of blessing with each shawl. 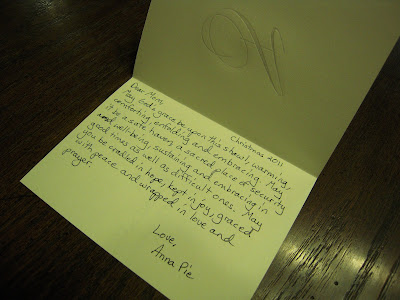 May God's grace be upon this shawl, warming, comforting, enfolding and embracing.  May it be a safe haven, a sacred place of security and well-being, sustaining and embracing in good times as well as difficult ones.  May you be cradled in hope, kept in joy, graced with peace and wrapped in love and prayer.

We headed to the Burg and were all set to open presents to and from me and Trent after dinner Saturday of that weekend. 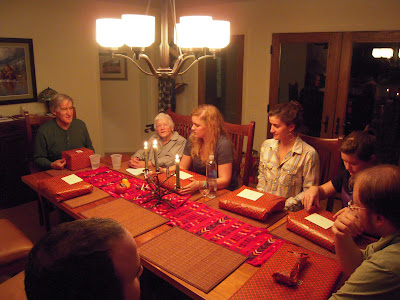 I had my mom and seesters read their notes first... 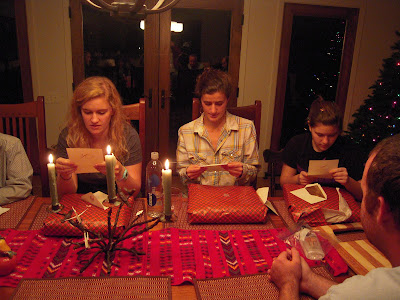 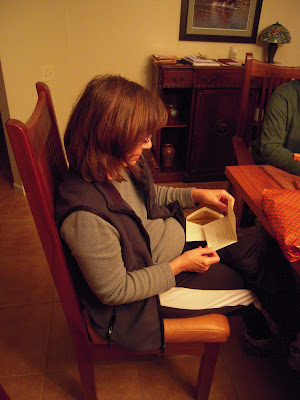 ...then open their gifts at the same time. 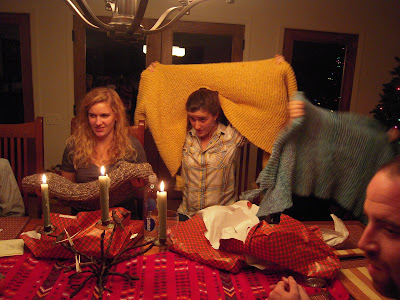 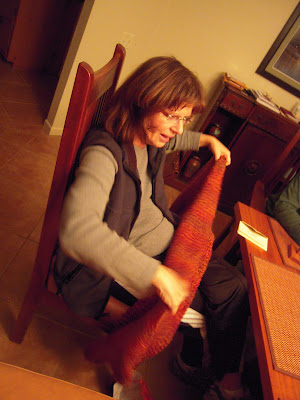 So the shawls were a hit in Fredericksburg.  Next up, Trent's mom and sister in Winnsboro.  I actually finished knitting K'Lee's shawl last Thursday, the day before we hit the road to Winnsboro.  Yikes!  I also finished up Donna's then too by putting the tassels on it.   But then they were ready to go!  Here they are, Donna's on the left, then K'Lee's: 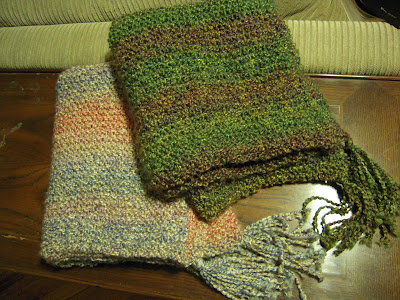 I put them through the same routine, asking them to read their notes first... 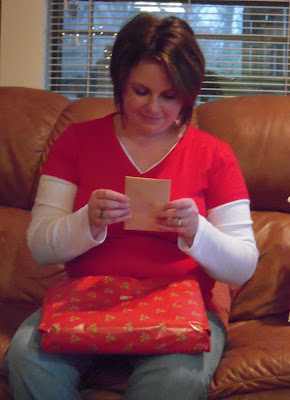 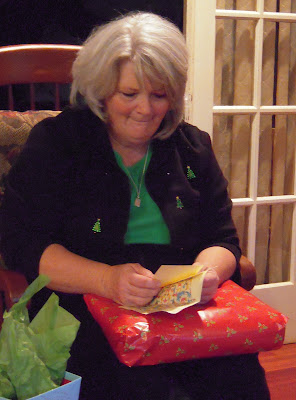 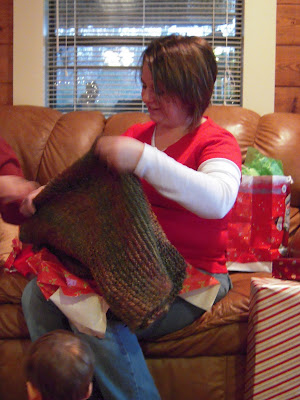 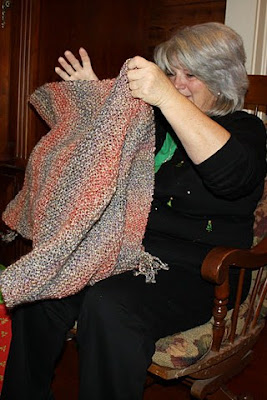 Donna cried, of course, and James exclaimed "K'Lee, now you have something to keep you warm in church!"   They each wrapped up in them from time to time throughout the Christmas weekend and even little Asher Boy was kept warm in his Grandee's shawl during a nap or two. 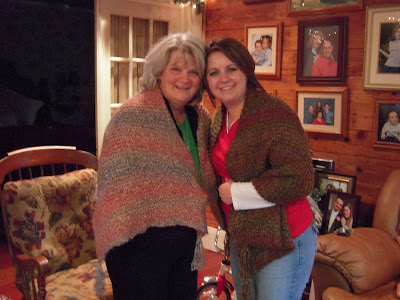 Now this wouldn't be a complete post about crafting without a little how-to, if anyone out there is interested in this project.  First of all, it wasn't my original idea.  Lots of churches have prayer shawl ministries and make them for members who have a baby or move away or have a death in the family or just need a reminder for some reason that they are wrapped in love and prayer.  I just snagged the general idea and made them for family members, just because I love them.

Each shawl requires 3 skeins of yarn and the best one for this (I believe) is Lion Brand Homespun yarn.  It is thick enough for the shawl to be warm but thin and soft enough for it not to be bulky. 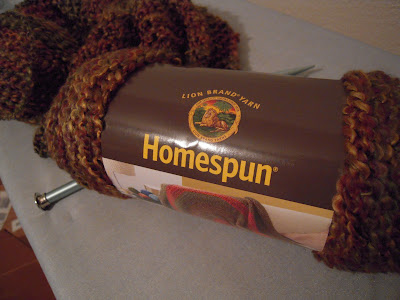 In Waco at least, I have found that Michael's has the best selection of colors for this brand, while Joann Fabrics and Hobby Lobby both carry it as well.  It is $6.99 a skein at Hob Lob, $5.99 at Michael's (and usually on sale) and I don't remember how much at Joann because I always pop in there with coupons anyway.

I used size 13 needles, though you could probably get away with 11 or 15 if you wanted it tighter or looser. 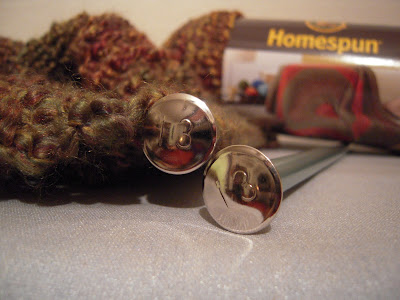 Needles are cheap if you don't have the right size and need to get some (or hit me up for some loaners because I have a ton, of many sizes).  I recommend metal needles, as opposed to wood or plastic, so the yarn will slide better while you are working.  My mom commented "You must have been using some loooong needles!" but the truth is, I didn't need to.  The stitches squish together just fine on regular 10 or 12 inch needles.  Just be careful to scooch it down to the base of the needles or put a cap on the tip when you set your knitting down so it doesn't come off the end.

For dimensions, the standard width I was told is 57 stitches, but I bumped it to 60 because...I don't know why actually...I just wanted a nice round number...  After looking at the finished shawls, I would actually add another 5 or 10 stitches if I could do it all again, for a greater width and more snuggling capability.   Maybe there are guidelines out there for how long to make them, but I just kind of kept knitting and kept wrapping each one around me and asking Trent what he thought of the length until I decided it was long enough, then I'd cast off.  Each shawl used two whole skeins and maybe a third or half of the third skein.  I have heard to knit it until it is as tall as you when held up, but be careful about that if you are especially tall or short.  Also consider if the person you are making it for is particularly skinny or maybe a larger person.  If you are making it for someone because they are having a baby, I'd say make it a bit longer to be able to wrap both mother and baby in the shawl.

Then there are the tassels. I took some example pictures with contrasting yarn so it's easier to see. Cut several pieces of the yarn, according to how long and how fluffy you want the tassels to be.  Remember to cut them double the length you want to end up with because they'll be looped back on themselves.  I cut 6 strands about ten inches long.  This type of yarn frays like ka-razy so tie knots at the ends of each strand. 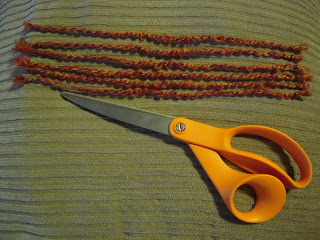 Bunch the strands together and double them over. 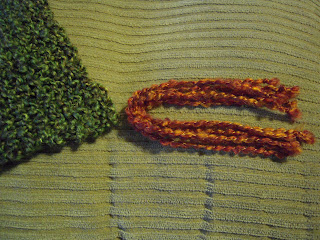 Then pull the end of the bunch down through the corner of the shawl with a crochet hook. 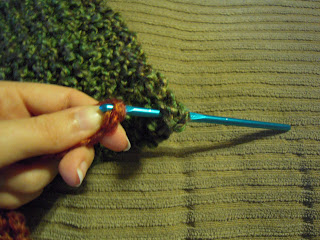 Reach through the loop and grab the ends. 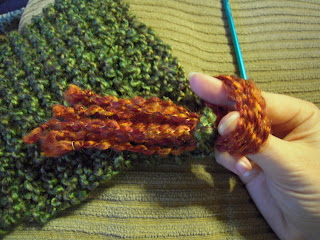 Then pull them down through the loop 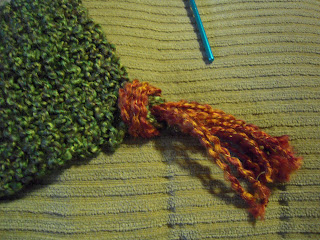 Pull to tighten, and there you have it! 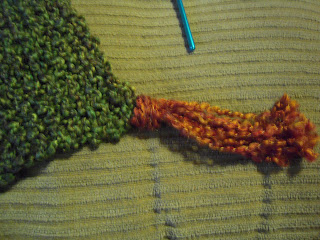 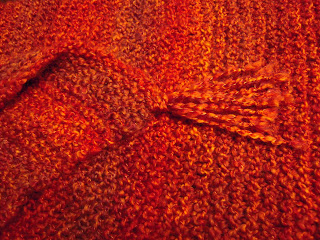 Finally, here are some stats that I added up and multiplied one day just for kicks and thought I'd share because they are somewhat hilarious and mind blowing.

Craziness.  Good thing I started in June! Towards the end, Trent said "I can't believe you aren't sick of that yet..."  That made me stop to think about it and I realized that I really wasn't sick of it.  This time last year I had just finished up a furious knitting spell to make my little hats that I sold during the fall and winter.  When that was all said and done, I didn't want to see or touch another hat for a long time...and I didn't.   Right now, after busting my buns (or fingers, rather) to finish up 6 of these shawls, I'm already thinking of who I can make one for next.  I believe the difference is the recipients.  With the hats, I was taking orders for a lot of quick hats for a lot of different people and while I really enjoyed filling those orders and sure enjoyed the money, it honestly wasn't all that fulfilling.  This is different.  This is special and these are made for special people in my life.  It's a gift of the heart and one that I was glad to knit 79,200 stitches to create this year.
Posted by Anna Pie at 12/27/2011