Reflections On Our First Week As A Foster Family

We're one week in to being a foster family.  This time last week, we were getting to know Brother and Sister who had just been brought to our house.  It has been quite a week.  Ok, that's an understatement.

It has been hard
Hey, you try having two strange kids plopped into your home with no context and no idea what kind of stuff or clothes you already have for them or need for them.  The first few days were nothing more than chaos management as we got to know these kids, tried to figure out what we had and what we needed, updated loved ones on our situation and tried to maintain sanity.  Today I think we finally hit our stride with a routine and by golly, it feels good.

But it has been good
Trent has taken some pictures over the course of this week which he put together today and showed to me.  The difference in these kids between Day 2 and Day 7 is obvious, in a good way.  They came to us not feeling well, stressed out and tired with frowns, sunken eyes and pale faces.  We can already tell they have brightened up, Sister gained a little weight and they are super smiley.  I think I flipped through those pictures about 12 times today.  This is why we are doing this.

I have cried a lot
This is a duh.  I'm a cry-er anyway, especially under stress, which has been abundant, and especially when I don't get much sleep, which I haven't.  In a text conversation with Trent's sister, I told her that whenever I've had little pauses, the gravity of this whole situation hits me like a ton of bricks.  She said "I think that's why God only gives little pauses."

The kids have not cried a lot
These are such good kids.  Omg.  Out of all the issues we could be dealing with right now...food issues, anxiety, bedtime issues, tantrums...you name it, there just aren't many showing up.  These kids get upset if they are bored, sleepy, hungry or hurt and, well, that's pretty normal I'd say.  Brother sleeps like a champ and Sister is getting better at it as we figure her out.

I got sick
The kids were congested when they came to us and gave it to me.  I ended up with a nasty cough and only half a voice since Monday.  But a doctor trip yesterday yielded a steroid shot, antibiotics, nasal spray and cough meds, so I should be good. to. go.

Parent visits are like a covert drug deal but with babies
Brother and Sister had a visit with their mom earlier this week.  Because foster parents are supposed to remain anonymous to the biological parents, I took the kids to the back door, which is in a striped off loading zone, handed them off to a social worker who shuffled them inside, then I went about my business for an hour, came back and parked in the no-parking zone until she shuffled them back outside to me, collected them and went on my way.   Weird.

Our church is awesome
After I threw up the white flag Sunday night and called over one of our former youth moms, who then witnessed a high level of distress and chaos over here, she and some ladies from our new church circled the wagons and we have been wrapped in a snugly circle of Christian love and support since.  This includes donations of supplies, toys and diapers, lots of prayers and advice, and actual humans coming over to either help wrangle kids while I organized clothes and toys or organize toys and clothes that I pointed to while I wrangled kids.  At one point a lady from church that I hadn't actually officially met until she came over was folding my underwear...  That's church, my friend.

This is our new normal: 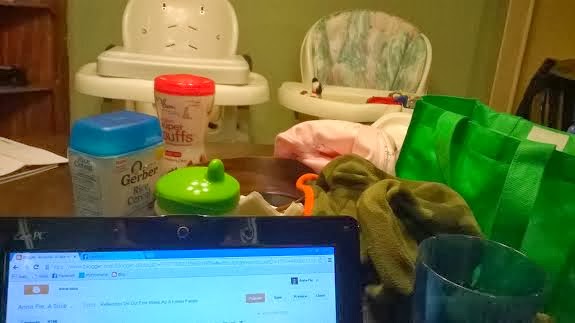 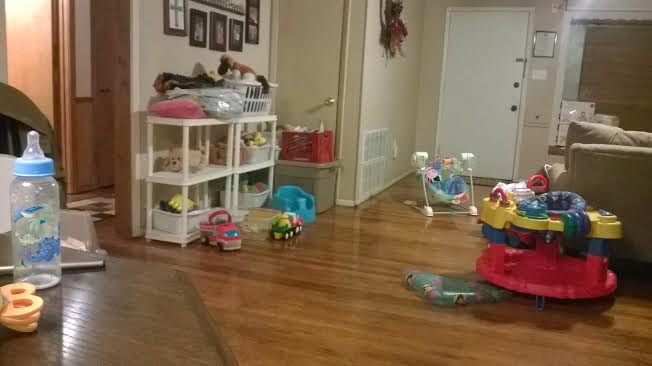