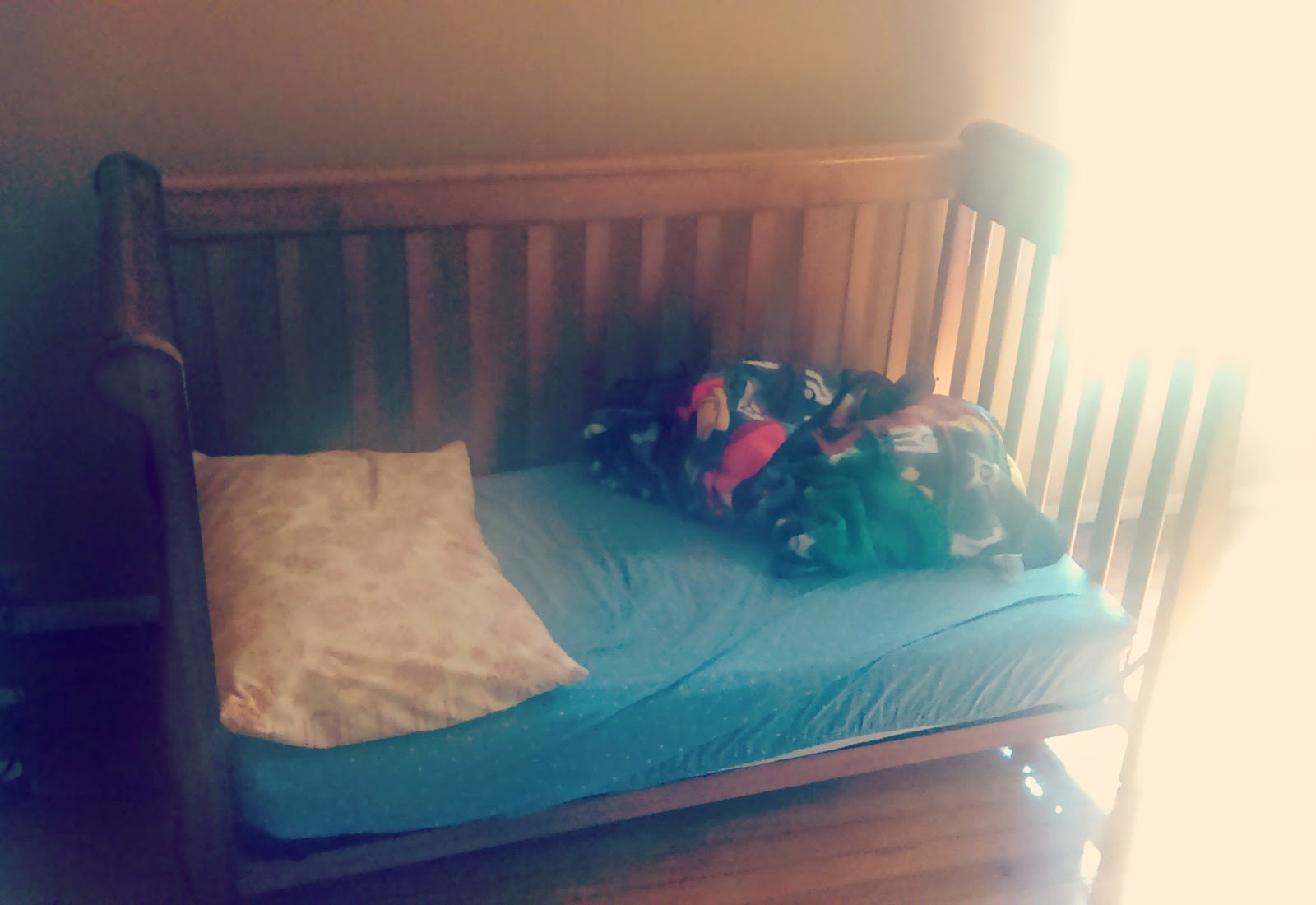 For clueless childless folks that don't understand what I am getting at with this picture...there are only three sides on that crib.

Just kidding.  Remember when I wrote in a blog post on day two of having the kids that they "might be the best sleeping foster kids in the state of Texas"?  It's true.  Except for some crazy months of ridiculous nights when I seemed to spend more time in Sister's room than in my own, our kids sleep like champs.  So much so that I had the following conversation with my friend Steph prior to her bachelorette party recently, concerning me and Tammy, the only moms attending and therefore getting a break from our kids:

Steph: I think you and Tammy will be the only women to ever leave a bachelorette party feeling rested and refreshed.
Me:  Um...you're talking to the lady whose kids go to bed promptly at 7:30 and don't wake up until...the next 7:30.

But here's the thing.  Our son learned how to climb out of his crib.  And being the independent, orderly boy that he is, he would toodle around in his room by himself, completely content to poke around in his closet or stare out the window at dusk.  There was just one problem.  When he wanted to actually finally go to sleep...he couldn't get back into his bed.  Now, he had the forethought (did I mention he is an orderly little boy?) to toss his pillow and blanket out of his bed each time before flinging himself over the railing, and rather than holler for mom or dad, he would resign himself to making a nest somewhere in his room when he actually tired of toodling.

We would listen for him to quiet down, then go into his room and put him back in bed for the night.  We'd find him curled up in the closet, in the tiny space between the end of his crib and the wall, or smack in the middle of the floor.  At this point I will remind you that there is actually a whole twin bed in his room as well that he could have easily curled up on, but, hey, creature of habit.

So we took the front of his crib off, with some trepidation and uncertainty.  Unmerited.  It has been a dream and he has rocked his new independence.  Sometimes we hear him get up and poke around.  Sometimes we peek in to find him standing at the window staring out.  Then all becomes quiet and we know he crawled into his familiar bed and went nigh nigh.  Even at nap time, he especially clunks around in there and at some point becomes quiet.  Later we hear the clunking begin again and wonder just how long his solitary contentedness will last before he starts hollering for us to open his door. It is surprisingly long.

Buddy boy is growing up!

P.S. For any worry warts out there, we okayed it with his caseworker that he can be in there alone with the door shut for logical periods of time, and there's nothing in his room that he can destroy or get hurt by.  Well nothing he can destroy any more...we learned that lesson the hard way with some ill placed baby powder...
Posted by Anna Pie at 4/30/2015