We own an old house.  This has been well established as truth on this blog.  One downfall of an old house, which happens to also be a big house, is that it costs a small fortune to heat and cool it.   We endeavored to decrease that small fortune leaving our bank account each month by re-insulating our attic earlier this year.  And by "we" I mean Trent and a generous church member named Gary who offered to help.  Since it took place during tax season, I was off at the office earning the overtime pay which made this endeavor possible.  So I guess I did help some.

When you buy over a certain amount (like $250 or so) of insulation at either Lowe's, Home Depot or McCoy's, you get the machine rental for free.  We chose McCoy's because, well, I don't know, ask Trent.   Gary volunteered his help and another church member named Will let Trent borrow his trailer for hauling the stuff.

The way this works is you haul home all your packages of insulation and the blower machine itself.  You snake a hose into the house through a door or window close to your attic opening.   Then one person feeds the condensed packages of insulation into the machine, which spins around inside and fluffs it up, then blows it through the attached hose.

This was Gary's job, but I assure you Gary does not look like that pink dude.  Hurray for random google images.

The other person is up in the attic with a face mask and the other end of the hose, pretending to be a fireman, but instead of water coming out, it's fluffy pink stuff. 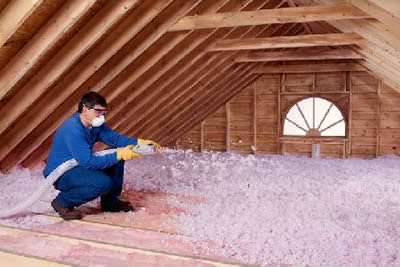 This was Trent's job and, once again, yay google image.  Of course I don't have actual pictures of this endeavor...I was at the office remember?  Trent had traipsed around in the attic beforehand and nailed some shims (random flat, long pieces of wood) around on the rafters so they would stick up and be a guide for how deep to blow in the insulation all over.  He did math to insulate our 2100-ish square feet to about R-9 but we ended up having enough insulation to blow it in at more like R-19.  Blah blah construction language.  It basically means we were able to insulate more thoroughly than we thought but still at the price we had in mind the whole time for the project.   Good job pink fluffy stuff!  Within only about two hours, our attic was a winter wonderland and Gary and Trent were done.

So here is a rundown of how this DIY money saving attempt is working out:

So, in 5 months' time, we have paid ourselves back almost half of our original investment.  Now I know we may not be comparing apples to apples since last summer was flippin hot and crazy dry whereas this summer wasn't quite as bad.  But still.

Raise your hand if you live in an old house.   Raise your other hand if it sometimes has not so friendly energy bills.  Raise your foot if you would be scared to tackle a project like this on your own.  (I won't make you raise your other foot. You're welcome)  Folks, it's very, very doable.  If all those home improvement stores rent these machines to normal folks and shoo them out the door on their merry way to insulate their own attics then it's gotta be pretty user friendly.   You just need at least two people, some face masks and a few hours.  Oh and some dollars.

Anyone interested?  Hit us up for questions or cheerleading.
Posted by Anna Pie at 9/30/2012