Our neighbor kids next door play in our front yard regularly.  They ride their bikes all over it, play football across both yards for more space and play in our sprinklers sometimes.  They also scooter, skip and skate all along the sidewalk and sometimes take a spill into our yard.  Sometimes a little girl from down the street joins in.   We certainly don't mind.  It's not like we have pretty grass they are going to trample...  They also have super awesome games of Hide And Seek meets Lord Of The Rings Elf Battle meets Space Invasion which involve the entire perimeter of their house and some of the bushes on the side of ours.

Our neighbor kids across the street just moved in and are absolutely hilarious.  It's two brothers and a little bitty sister.   Trent once heard one brother tell the other "You're a lame-o!"  I mean, come on, who calls someone a lame-o anymore?  Lost art.  Trent had a good giggle and went on with his grilling.  One time I got home from work and saw big brother carrying little brother around by the waist...upside down.  Just toting him around.  No idea why.  Another time big brother was poking around by the street picking up pecans and little brother was very, very busy keeping little bitty sister a safe distance from the road, under the pretense of hiding behind their trash can and peeking around it.  If she tried to get out he would herd her back behind it and say "ssshhh" as if they were spies. The other day when I tried to go jogging, I went past their house and little brother gave me a very friendly "Hi!" from their front porch.

Our neighbor kids caddy corner to our back yard are two little girls, either sisters or our neighbor and her friend.  These little girls have such creative minds when it comes to the games they play.  When I was outside in the back yard painting the shelves for our laundry room remodel a while back, I was so, so amused and impressed by how well they played together, outside, in a back yard with no playground or toys or tv screens.  "Such and such is chasing us, we have to run and hide behind that bush as fast as we can!"  "Guess what animal I am.  Ok now you be an animal and I'll guess what you are."   "Ok let's both jump up and down and see who can jump up and down the longest."   And the giggles, oh the giggles.

We are surrounded by cute, creative, playful children and I am so excited about that.  Pretty soon we'll also have small children in our home and I hope our kids can fit right in with these funny, fun, creative neighbor kids.  I have SUCH fond childhood memories of playing with the kids next door on the 30 acres next to our 30 acres...playing house and school and war and spies, hosing each other off after dancing in mud puddles, swaying in the tippy tops of cedar trees, dodging snakes at the creek, throwing tennis balls over the roof to each other, having Thumbs Up Club meetings in the chicken house and Nasse Creek Gang meetings in the barn attic, playing hide and seek in the front field of newly baled hay, saving little fishies that got stuck in puddles when Pirate Swamp across the fence overflowed after a good rain...

Trent and I don't have 30 acres, the neighbors next to us don't either, and the neighbors next to them don't have a Pirate Swamp.  But we've got a front yard that we'd love for a passel of our kids and neighbor kids to trample.  We've got a shed they can use for Thumbs Up Club II meetings.   And if they want to throw tennis balls over the roof, Trent can help them take that game up a few coolness notches and whip out his air canon. 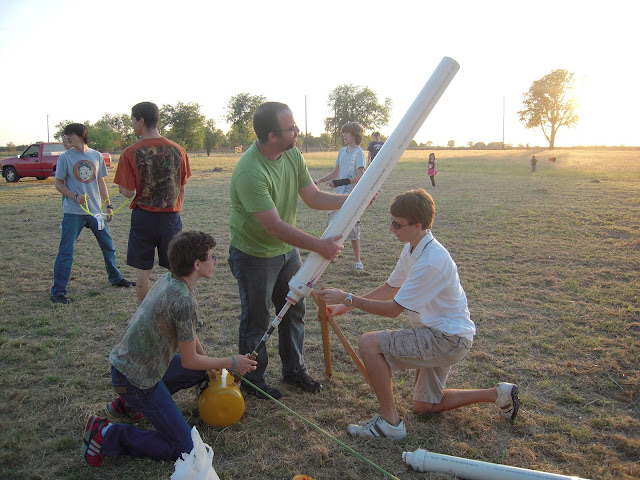