No More Preheating Our TV

For about the past two years, we have had to let our TV warm up for anywhere from zero to thirty minutes before being able to watch it.  I don't remember exactly when or in what fashion it started but one day it decided it wanted to be ka-razy for a while before the picture showed up each time. So yeah, we have been preheating our TV like an oven for at least two years...

You may be wondering what kind of ka-raziness it did all that time.  Sometimes it would surprise us and come right on perfectly, and we would hold our breath hoping it would do that anytime we wanted to watch something important or live or close to our bedtime and we didn't have time to wait.  Sometimes it would flash the picture but freeze, then flash up another frame and freeze, flash and freeze.  But the majority of the time, it had its own TV version of the Northern Lights on the screen, ever changing, ever fading in and out.

It had horizontal lines... 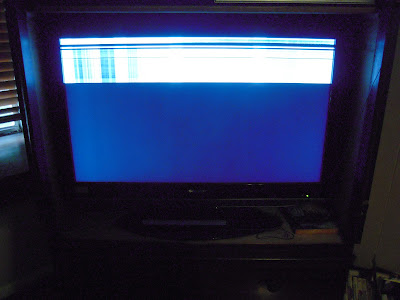 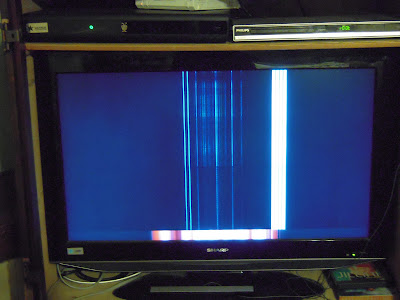 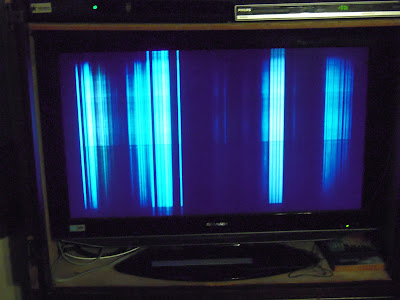 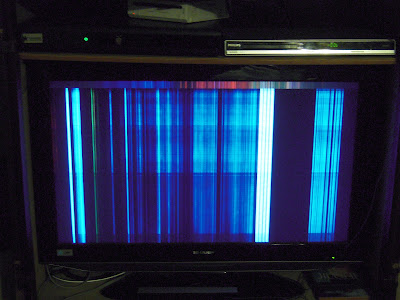 They're actually kind of pretty, don't you think?  Sometimes we would find ourselves listening to whatever was on TV behind the Northern Lights, staring at the lines fading in and out, mesmerized, all the while hoping the picture would pop up any instant bringing with it genuine and audibly expressed joy.

Well, sadly, ole TV finally bit the dust this week.  For the entirety of Tuesday, during which Trent was home sick on the sofa, he tried every combination of turning on and off, waiting a long time, waiting a short time, begging, pleading and yelling he could think of, to no avail.  By the time I came home from work, it was still showing the Northern Lights and we decided it was time to get another one.   We hit up a few TV selling places that evening (and one fried chicken selling place for dinner where one of our girls now works) and ended up getting a 32" Samsung LED TV at Best Buy.  It was indeed the best buy for us. 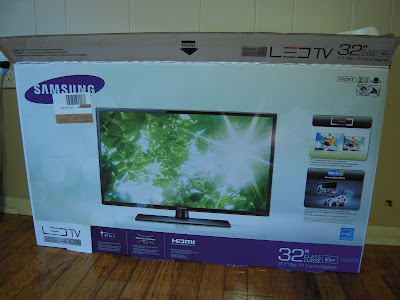 Dude.  Flat screen TVs have gotten wa-hay cheaper in the past few years.  For perspective, and for those of you wondering what brand our old TV was so you can avoid it, we got it in 2008 as a wedding present to ourselves for about $850.   (And by wedding present I mean monthly payments on it for many moons thereafter.  Oh to be young and stupid again...)   It was made by Sharp.  Apparently Sharp wasn't so sharp because that brand is nowhere to be found in stores now.  Our new TV is a Samsung (a better brand), LED (a better TV) and was only $350 (we found it on sale, down from $400).  AND, check this out: 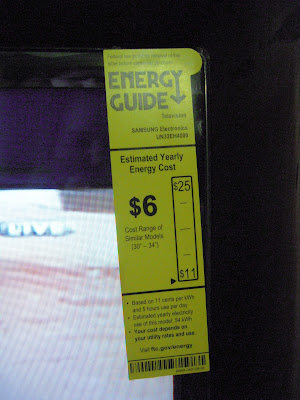 Energy cost of a whoppin' six bucks a year?  Yes please.   AND, it makes super cool spaceship noises when you turn it on and off, which we can do freely now without having to consider when the next time will be that we want to watch TV and if we should just leave it on in the meantime to avoid having to preheat it again later.

You may be wondering why it took us two years of warming up our TV to bite the bullet and just get another one.  Well...it wasn't broken.  It still showed TV shows and movies and workout dvds and Wii.  It just took a little while for them to actually show up.  We had the conversation many, many times about just ditching the not-so-Sharp TV and getting another one.  But each time we came to the same conclusions:

1) Even though TVs are cheaper now, that is still a big purchase for us.
2) "We've made it this far, why not keep on going?"
3) It technically still worked.
4) Having to warm up our TV made TV time kind of special for us and (go figure) limited the amount of totally brainless, time wasting TV watching we did.  It made TV or movie watching this funny, long routine that had to be planned for and anticipated.  Believe me, if you have to wait half an hour each time you turn on your TV, you are going to want to turn on something that both will enjoy.

So here's to the first TV of our marriage.  Here's to the frustrating Northern Lights and teaching us to be patient.  Here's to the informal bets placed on how long it would take it to warm up and the silly expressions of joy when it finally did.  Here's to the numerous cumulative hours over the past two years spent together while our TV warmed up instead of watching some mindless shows.