Hey, get your mind out of the gutter.  I'm not literally talking about not wearing pants.  This is a G rated blog series...

I'm gonna be honest here and say that I have a lot of thoughts for this post and so far they aren't all coming together in a super smooth fashion so this might be all over the place.  Bear with me as I dive in...

Trent and I believe that a marriage should be a partnership.  I take it a nerdy step further and kind of like the idea of a marriage being a Limited Liability Company because the concept of spousal attribution implies that the married couple is the sole owner of said LLC as one unit. (At least in Texas)  That's kind of romantic, right?  In a super nerdy kind of way?

A marriage is a joining of two individuals who will each bring many different strengths, weaknesses, ideas, and abilities to the table.   Doesn't it sound like a good plan to try to capitalize on all those differing things for the good of the relationship as a whole instead of one person's strengths, ideas, etc, being given greater importance?   I'm talking about the whole spectrum, from little stuff like who does which chores to big picture things like kids, careers and life dreams.


Throw stereotypes out the window!  I mean a couple things by this:

~Stereotypes will probably develop within your relationship and that's cool, but allow those to break down occasionally.  Let me explain.  I am the doer of the laundry in our household and that's great.  It's a norm or stereotype that has developed and it works well.  But today I came home planning to start our vacation laundry and found that Trent had already done two loads.  Or, Trent is the mower of the grass random green stuff in our yard, but a few weeks ago he was sick and it was a jungle so I tackled it.  These are little things to illuminate my point (hopefully?) but it could be big stuff too.  Do you follow one spouse's job or have you moved because of it?  What if you turned the tables and moved cities for the other spouse's job so they could follow their dream career instead?  Find norms that work for your marriage but don't feel like you have to then be locked into them.


Trent and I have a motto or slogan for our relationship: Hand In Hand.  It was in our wedding vows.  It's on the canvas that Steph made for us.  It's how we live out our marriage. There's a song by Jo Dee Messina that says "I want a man who stands beside me, not in front of or behind me."  I really like that phrase because it goes with this idea of walking hand in hand.   You have to be side by side, on equal footing, in order to be comfortably hand in hand.  Does that mean you have to see eye to eye on everything?  No.  Does that mean you both have to give equal effort to every task, decision, or problem that arises? No.   Does that mean you both have to be equally good at everything?  Of course not.  It's not an issue of being two versions of the same person, it's an issue of equally considering the strengths, weaknesses, ideas and abilities of both and putting those into play in a way that best suits your marriage and brings you together as a unit.

As I suspected, that was indeed kind of all over the place.  So, in conclusion, I couldn't find any cute pictures of us that had to do with pants, but I remembered this incriminating church camp photo of Trent wearing some ridiculous pants...and some other ridiculous attire... 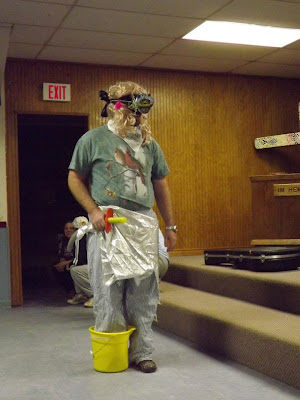 Do not ask.  I already did, and Trent himself has no explanation for the bundle of hilarity shown above.

Email ThisBlogThis!Share to TwitterShare to FacebookShare to Pinterest
Labels: Marriage, No Longer Newlyweds