Sidenote: today marks Trent's second anniversary of being a youth minister. "They" say that if you can make it through the first two years then you are good to go. Well, here we are then! Ready to tackle the rest of this adventure.

For part 3 of this little No Longer Newlyweds series, I thought I'd talk about fights, arguments, misunderstandings, whatever you want to call them. 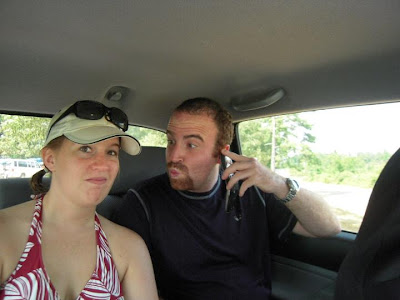 After a canoe trip that Trent said would be no sweat, but actually we wrecked
twice, I lost my shirt, we got bonked and bruised, got stuck on/in/between many
rocks and even got stuck under the flipped canoe under water for a bit.
I was MAD.

One of our youth asked me recently: "Do you and Trent ever fight?" When I nodded and said that yes, we do fight sometimes, the response was one of disbelief.   "But y'all seem like the perfect couple."  * Real Life Teaching Moment *  I explained that even super happy couples have arguments and disagreements sometimes and occasionally hurt each other.  But if you have a foundation of love and respect, those scrapes can be gotten through without any rattling effects.

I have heard it said that the first year of marriage is the hardest, contains the most arguments, the most tension, and therefore the most growing and stretching, and that "if you can get through that first year, the rest is smooth sailing."  That wasn't really the case for us. From the beginning, when tension has popped up, and believe me it has and does, we have been pretty good about it not eating us alive.  Some particular situations reared a pretty yucky head and were totally not fun on either side, but we got through them.

I joke sometimes that Trent and I have quarterly fights, kind of like quarterly estimated tax payments.  If you are self employed or have a lot of non-wage income, you know those estimated payments are going to come around every few months, and they aren't going to be fun, but you just have to get through them and pay what is due, then move on. (Nerd example, omg)   Our arguments happen here and there, not super often.  Sometimes little and lame, sometimes big and bad.  I usually cry regardless because I just want the whole world to get along, but I know deep down that we'll be totally fine and will probably even be better for it.

Trent and I are good at fighting.  That sounds totally strange, I know, and it has taken me some time to formulate what I even mean by that. Here are some things that I think are good to keep in mind in order to be "good at fighting."

~Don't be afraid of a fight and don't believe that it is the end of the world.  If arguments are viewed as negative relationship points and are therefore constantly feared and forever remembered, that is a huge cloud over your relationship!  People aren't perfect and people aren't the same.  Upsets will happen and you will survive.

~Hold nothing back, but stick to the topic at hand.  If opinions and feelings are being flung into the open, by all means, fling away.  But don't hunt through your heart for totally unrelated curve balls or zingers that have no purpose but to hurt.  You can be angry and still stay on topic.

~Give time and space.  Trent and I have a big house that is pretty stretched out.  Perfect for getting away from each other after an argument.   I'm not kidding!   Some arguments can be resolved on the spot, but some are a merry-go-round and eventually everybody needs to get off of it and simmer down. So do it.  BUT, see the next point...

~Come together again.  I'll never forget the time that Trent and I had argued and subsequently fled to the far corners of our big house for a little while, then, as if on cue, we almost bumped into each other in the kitchen as each of us was headed toward the other's end of the house.   Come together again.  This is so, so, so important.  Even if the issue isn't completely resolved, push the pause button and resolve it another time instead of harboring grudges and waking up with hungover anger the next day.  Trent is much better at this step than me.  He is usually the one to come retrieve my weepy self from the front window seat or crawl back into bed and put his arm around me.  I'm more like the girl in the country song "I Just Want To Be Mad For A While."   You don't have to totally make up.  You don't have to find the answer.  Usually we don't even say anything.  But we're back to being a unit, back to being us.

~Learn more about each other and grow closer together.   This is impossible to do in the heat of an argument, but is a super important thing to consider when the tornado has left the building.  You hear a lot of people later say "I don't even remember what we were arguing about" and I think that is a good place to get to eventually.  But before you get there, purposefully think of all the things you were refuting or defending about yourself in the argument and instead of thinking "I was so right, what a great defense I made", try thinking "Is there any room here for improvement on my side?  Does this argument bring to light something I could work on to better our relationship, show love to my spouse and prevent future arguments about the same topic?"  I know, I know, you're thinking you were so right and she was so wrong or "he started it".  Hey, we're not in 2nd grade.  If something in your relationship is important enough to get into an argument about, then it is important enough to give some thought to after the fact and see what you personally can do to better that particular situation and better your relationship as a whole.

These are just a few ideas from my experience.  All I am able to write about are my own experiences.  I know some couples sort of bicker with each other playfully all the time and it's just a part of their relationship that they acknowledge and laugh at.  I know there are relationships out there too where fights and arguments are the perpetual norm...that's over my head.  I highly doubt there are any relationships out there where there are zero disagreements.  That would not provide for much excitement or growth. To quote Brad Paisley, "I know she's not perfect...and I thank God that she isn't, 'cause how boring would that be?"  (So much wisdom in country music, haha.)

So, for all you totally normal folks out there who have arguments with your spouse sometimes:  Let the games begin...er, continue...
Posted by Anna Pie at 5/16/2012

Email ThisBlogThis!Share to TwitterShare to FacebookShare to Pinterest
Labels: Marriage, No Longer Newlyweds