And We Were Swingin'

Trent and I got married on 5.18.08 and moved into our first little married apartment on Ivy Ave.  A few weeks later, a long, thin box showed up on our porch with no indication whatsoever about who it came from.  It was a porch swing.  We were kind of confused and let it sit on our porch for a while, wondering if it was even supposed to be for us.  But our name and address were right there on the box.   After some investigation, we discovered that it was a wedding gift from a group of our friends, including Steph and Rach.  We didn't hang it up at our little apartment, partly because there wasn't much room on our little porch and also because we weren't sure if we should screw giant bolts into the porch beams since we were renting.  So the box lived on our porch for a bit, then it lived inside, leaned up against the tv, then it lived under our sofa, then it got moved to our house and lived in Trent's shed. 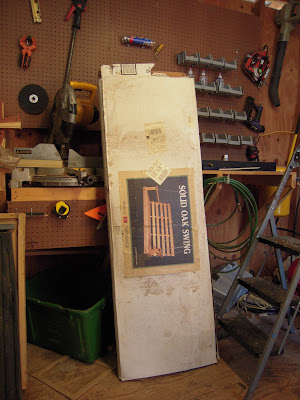 One of my criteria before and during house hunting was that we have a porch to hang up our porch swing.  Well...fail.  Our back porch roof is more like a lean-to made of tin and two by fours and its chances of being strong enough to hold a swing are slim.  Our front porch is just big enough for the door and our side porch has no roof over it.   What to do?   Well...the box continued to live in the shed from move-in during April of 09 until now.   Last September, Trent began to build me a gift for our 6th anniversary of togetherness on September 30th.   I was not allowed to go in the shed.  Well, that gift got set aside as we embarked on our homemade Christmas adventure.  During said adventure, I was out in the shed a lot seeing what Trent was working on, checking on stuff, etc.  Needless to say, I saw the large and unmistakable beams leaning up against a wall in the shed and figured out what it was...

This morning, Trent went out to the shed to put some finishing touches on it then came inside and told me to put some warm clothes on and come see.  I was still in pajamas and too excited so really I just put on my fuzzy boots and my coat. 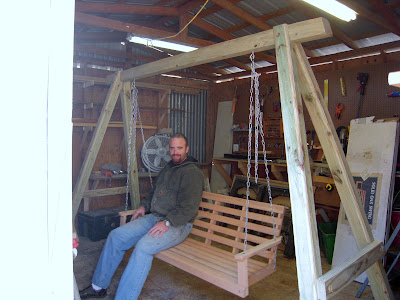 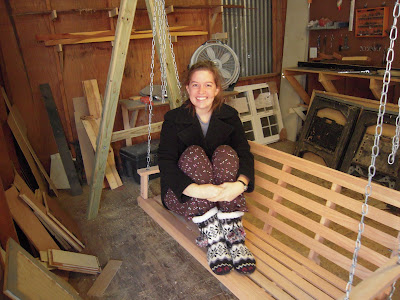 Then came the realization that we somehow had to get the giant thing out of the shed, around the house and to the side porch, where we had decided it will live.  We took the swing down and it wasn't too hard to move the frame.  Success!   Now I can be swingin' while Trent is grillin'.


The swing is raw oak so we'll seal it and we are going to put deck stain on the frame to make it a darker woodgrain color.  We thought of painting it white but you can't paint treated wood supposedly.  Won't stick.   But decks are made out of treated wood so deck stain should work great.  If we can find it in a container less than 5 gallons...

Bonus: The whole time we were moving it and setting it up, Trent was singing "Oh Anna she's as purty as the angels when they sing, I can't believe I'm out here on our side porch in the swing. And we were swangin..."