Flashback time!   Bethany, one of my highschool classmates at Heritage, always had THE BEST birthday parties.  Ok, well the two I attended for the two years of highschool I had with her were pretty swell.  Our junior year, she threw a punk party and turned their house into "Club Bane."  Costumes required.

Lil Anna Pie dress up as a punk?  I had no idea what to do.  So I ended up buying a lot of random black stuff from various cheapo places.  Mesh soccer goalie jersey and skort (that deceptively looked like a mini skirt all the way around!) from Burkes Outlet, red cami I already had, black boots from Goodwill that I stuck pink sparkly laces in (that's punk, right?), fish net stockings I had to buy (gasp), a chain around my waist from somewhere (also punk, right? I was clueless...), and the original black shoe strings from the boots as bracelet and necklace.  I painted my nails black, stuck on a fake tattoo, put on a crap ton of dark eye makeup and lipstick, fixed my hair super cool and spiky and...ta-da.  From Anna Pie to Anna Punk. 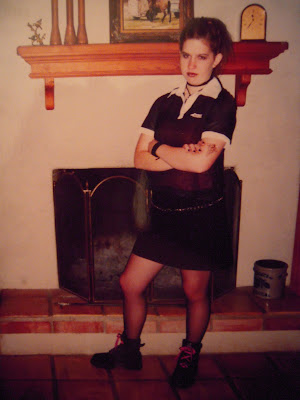 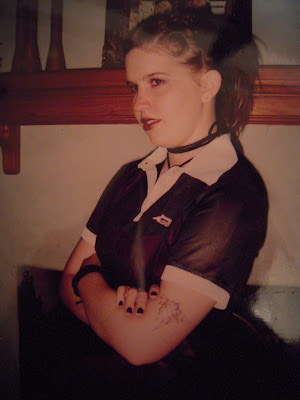 Mom wanted to take pictures as if I was going to prom.  The only reason Dad let me leave the house looking like that was because I was attending the party of his law partner's daughter at their house where he knew I'd be safe...  Yipes!  Trent is terrified by these pictures, by the way.

Bethany's dad was dressed the part of bouncer and stood at the door demanding invitations be shown for entrance to the party, wearing sunglasses even though it was dark outside.  I flicked my invitation at him in punk fashion (or at least what I thought a punk would do?) and he announced I could go in.  Then he broke character, turned into kind Mr. B instead of mean bouncer dude and laughed as I went inside.  The party was a blast.  I added some temporary green streaks to my hair while there.

I couldn't unearth very many pictures from the party, but here is Bethany, the birthday girl, and Josh. 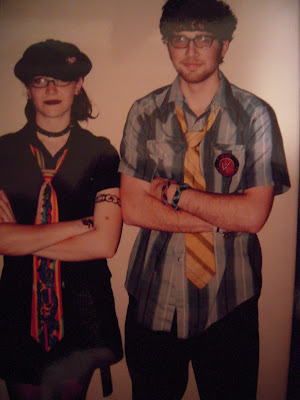 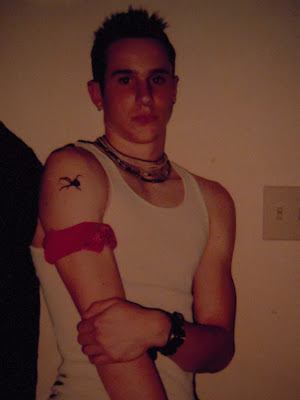 Some people went all out on their outfits.  Others threw on a loose necktie or fake nose ring and called it a night.  My punk outfit proved its apparent success and authenticity later that year when I resurrected it as a Halloween costume to attend my friend Hershel's garage band concert in the town next door.   I really almost didn't get out of the house that time...  Hershel's friends actually were punks...and totally thought I was one.  Maybe I really do have a streak of punk in me.  Or not...